Is George Linde the type of depth the Proteas desperately need?

The 27-year-old is suddenly quite hot property following a fantastic start to the new season. 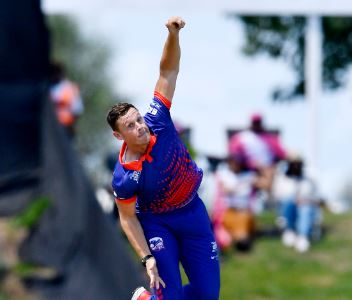 With the  Proteas  in a world of trouble following a worrying few months of shocking results, South African cricket is crying out for quality depth as it looks to recover and become a force in the global game once more.

With the likes of Hashim Amla, Dale Steyn, JP Duminy, AB de Villiers and Imran Tahir (from ODI cricket) having now all moved on, the national set-up has lost a large chunk of experience and ability.

A seventh-place finish at the 2019 Cricket World Cup came after a 2-0 Test series loss at home to Sri Lanka and before another disastrous trip to India where the Proteas were hammered 3-0 as they slipped to five straight Test match losses for only the second time in their history.

There have obviously been very few individual success stories along the way.

One man who is in the form of his life and feeling on top of the world at the moment, however, is  George Linde .

The 27-year-old left-arm orthodox spinner has been a consistent performer at the Cape Cobras for a number of seasons now, and a string of impressive domestic returns in 2018/19 saw him included in an SA ‘A’ side that travelled to India earlier in the year.

He was still as shocked as anyone, though, when an injury to Keshav Maharaj saw him flown into Ranchi and straight into the team for the third Test against India for a Test debut last month.

It was completely unexpected, but Linde showed with figures of 4/133 and two gritty knocks of 37 and 27 that he was comfortable on the biggest stage.

“It’s amazing,” Linde told Cape Town media on Wednesday when asked what it was like to have a Proteas Test cap at his house in Brackenfell.

“I haven’t seen it since I got back home yet because I put it in the safe. It’s not going anywhere, so whenever I get my call-up again, I will get it out.”

Linde says he is more confident in his own ability now than ever before, and it shows in the numbers.

In his first match back for the Cobras after the India series, Linde carded his highest-ever first-class score when he knocked  122 in a superb innings against the Warriors in Cape Town.

He then smashed 24* (13) in the Mzansi Super League opener against the Jozi Stars for the Cape Town Blitz and followed that up with 3/23 in a losing cause against the Paarl Rocks this past weekend.

“I feel quite good with bat and ball, but I try not to overthink anything when I train,” he said.

“You never know when this form might go down again, so I’m just trying to ride the wave.”

Linde credits the work of Cobras and Cape Town Blitz coach Ashwell Prince in helping him take his game to a new level.

“I feel my body language has changed quite a lot from last season. I believe in myself a little bit more now and I see I can actually play on that level,” Linde said.

ALSO READ: Your complete guide to the 2019 Mzansi Super League

“It’s all about the body language and showing that I am here to play.

“Three or four years ago when he (Prince) arrived I probably didn’t even think about playing for the Proteas, now it is there.”

When England arrive for four Tests in December, the Proteas will almost certainly back Maharaj as their first-choice spinner.

Linde, though, has surely now moved ahead of Dane Piedt in the pecking order.

His batting form in recent months, meanwhile, has revealed an ability to hit long balls and clear the ropes with ease.

With a T20 World Cup on the cards in Australia next September, Linde is emerging as an attractive option.

It has all happened rather suddenly, but given where South African cricket is at the moment, the emergence of Linde as an option will be welcomed with open arms.

He will next be in action when the Blitz host the Jozi Stars at Newlands on Thursday.