'In a perfect world I would like to finish off in South Africa, but whether that will be the case, we'll talk about it after the World Cup,' he says. 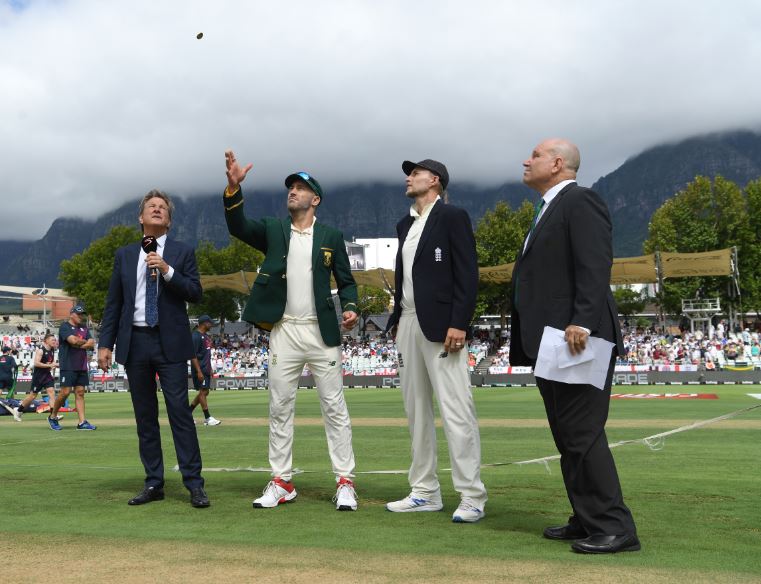 England captain Joe Root looks on as South Africa captain Faf du Plessis tosses the coin before Day One of the Second Test between England and South Africa on January 03, 2020 in Cape Town, South Africa. (Photo by Stu Forster/Getty Images)

Faf du Plessis joked with media on Thursday, referring to Newlands as the ‘Home of Cricket’ in his pre-match press conference ahead of the second Test against England.

The Proteas skipper may have been based at Centurion for all of his South African domestic career with the Titans, but he now lives deep in Cape Town’s southern suburbs.

He is also captain of the Paarl Rocks in the Mzansi Super League.

When the second Test gets underway on Friday, most of the hype will centre around Proteas seamer Vernon Philander, who will be playing his 11th and final Test at the iconic venue before retiring from international cricket at the end of the series.

It will be a fitting farewell for a man who has contributed so much to South African cricket, but there could be another Newlands goodbye that slips under the radar in the form of Du Plessis.

As it stands, the ongoing series against England is the only Test cricket the Proteas will play at home until either the end of the year or early next year, when they host Sri Lanka in two Tests.

There is a two-Test tour to the West Indies in July/August, but that is the sum of the Proteas’ Test obligations this year with October’s T20 World Cup in Australia the priority.

It means that Du Plessis, who will consider his international future after the T20 World Cup, might be in the middle of his last home Test series and, like Philander, about to make his final appearance at Newlands.

“I was the last one standing with Vern now from our generation,” he told media on the eve of the second Test.

“I don’t know, to be honest with you. I said before that the T20 World Cup would be a crossroads in my career where I would see where I’m at.

“Something will have to give from a format point of view, and I don’t know what that is yet.”

After South Africa’s disappointing performance at the 2019 World Cup, where they finished seventh, Du Plessis said he would have to consider his ODI future. That still seems the likeliest format for him to step away from first.

“As a team, if you look at the next year, Test cricket and T20 cricket are probably our two main focus points, so possibly in the ODI game we will start looking at guys who can get opportunities,” he said.

“There is not a lot of Test cricket this year and this is the last one at home until December.

“In a perfect world I would like to finish off in South Africa, but whether that will be the case, we’ll talk about it after the World Cup.”