The batting of the Lions left something to be desired, but their bowlers delivered under pressure. 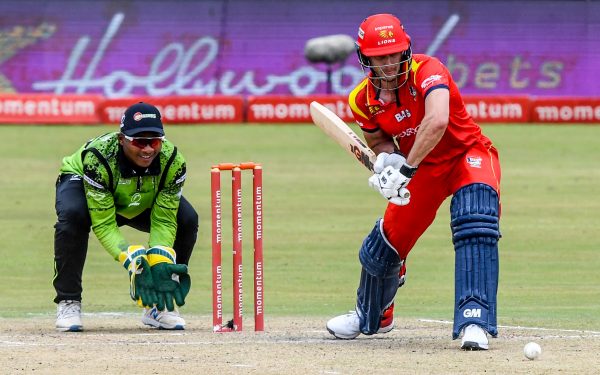 Nicky van den Bergh made 73 runs for the Lions in their One-Day Cup win over the Warriors. Picture: Gallo Images

Another outstanding all-round bowling display by the Lions backed the Warriors into a corner and saw them defend a mediocre total of 210 to win their Momentum One-Day Cup match by 42 runs in Potchefstroom on Sunday.

On a tricky pitch which rewarded straight lines, the Lions pacemen were extremely disciplined and the spinners were once again excellent as the Warriors were bowled out for 168, exactly the number the Lions required for a bonus point.

The Warriors only just failed to prevent the Lions from getting their second successive bonus point win thanks to the gutsy efforts of their tail, with Glenton Stuurman (10), Mthiwekhaya Nabe (14*) and Stefan Tait (9) ensuring the last two wickets added 36 runs.

The Warriors’ other vital batsman, Rudi Second, also fell for a duck as his cramped attempted pull off paceman Sisanda Magala (9-1-34-2) was smartly caught by Wesley Marshall, moving quickly from a short midwicket.

All-rounder Delano Potgieter (5-0 19-2) also chipped in with a couple of wickets and it was left to Wihan Lubbe, who fought for two hours for his 42, to keep the Warriors hopes alive.

But the Lions attack once again delivered under pressure.

The batting of the Lions, though, obviously left something to be desired as they crashed to 47 for four.

But the experience and determination of Nicky van den Bergh, who played some fine strokes in collecting nine fours in his 73 off 92 balls, with the help of Potgieter, saw them to a good enough total of 210 all out.

The left-handed Potgieter showed impressive composure as he added 129 for the fifth wicket with Van den Bergh. Normally not shy to show his attacking tendencies, he batted within himself to score 57 off 67 deliveries.

The loss of Van den Bergh and Potgieter, when both were about to launch, obviously reduced the final Lions total considerably, but it was still enough considering the brilliance of their bowlers and the submission of the Warriors batsmen.

Seamer Nabe removed both Van den Bergh and Potgieter on the way to highly creditable, career-best figures of four for 31, while left-arm spinner Smuts was tight and probing as he took three for 40 in his 10 overs.