The slow left-armer and the off-spinner destroyed the Titans batting lineup as the home team won an extraordinary match. 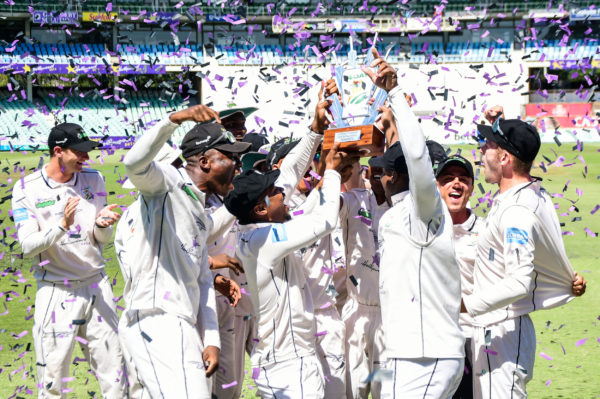 The Dolphins celebrate winning the first class domestic competition on Monday after beating the Titans in the final in Durban. Picture: Darren Stewart/Gallo Images

Only a run-out prevented spinners Senuran Muthusamy and Prenelan Subrayen from the unprecedented feat of both finishing the match with 10-wicket hauls as the Dolphins won the 4-Day Domestic Series final in extraordinary fashion at Kingsmead on Monday, beating the Titans by an innings and 76 runs.

The Titans were bowled out for 166 towards the end of the extended morning session on Monday, a vast improvement on their miserable 53 all out in the first innings, but still nowhere near enough to prevent the Dolphins from claiming the title outright.

Slow left-armer Muthusamy was the second-innings destroyer, taking six for 79 in 28.2 overs, giving him match figures of nine for 91. Off-spinner Subrayen claimed four for 56 in 38 overs, giving him 10 for 80 in the match.

It is the first time in South African first-class history that two bowlers from the same side have taken 19 wickets in a match. The other Titans wicket fell to a run out.

With almost the entire first two days of play being lost to the weather, it seemed something miraculous would have to occur for an outright result to be achieved.

The Dolphins had that magic in their kitbags though, their two magnificent spinners being accurate and relentless, backed by superb fielding, led by wicketkeeper Mangaliso Mosehle, Keegan Petersen’s catching up close and Ruan de Swardt in the ring.

The Titans batsmen just did not have the skill and intent available to them to break the stranglehold, although Rivaldo Moonsamy showed good fight on Monday as he scored 41 in two hours at the crease.

The Dolphins have been the dominant team in the domestic season, claiming two (one shared) of the three trophies available to them and reaching the T20 final.