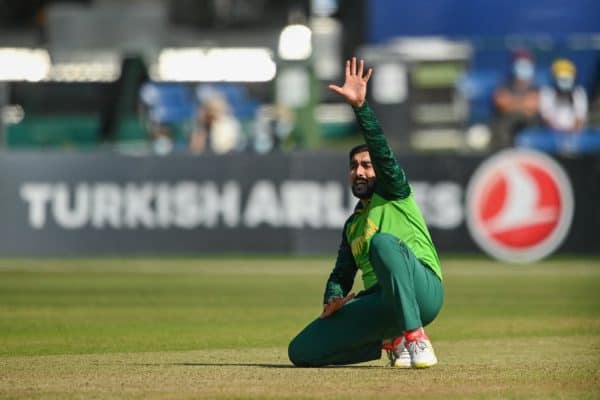 Tabraiz Shamsi of South Africa has spoken about how he's got to the number one spot for bowlers in T20 cricket. Picture: Seb Daly/Gallo Images

Tabraiz Shamsi has exploded on to international T20 cricket a bit like a stealth bomb over the last couple of years but he says there is no big secret to his success – just more regular playing time.

Shamsi produced yet another outstanding display on Monday evening in Dublin, taking four for 27 in his four overs to help South Africa to a 33-run win over Ireland. He was the No 1 bowler in the ICC T20 rankings before the match, with a lead of 102 points over the much-lauded Rashid Khan of Afghanistan, so that gap is only going to grow after the 31-year-old yet again produced the goods.

Since the start of 2019, Shamsi has played 29 T20 Internationals and taken 36 wickets at an average of 20.05 and with an economy rate of 6.44. They are phenomenal figures and they reflect how crafty the left-arm wrist-spinner has become in being able to both take wickets and stem the run-flow.

“Playing regularly, I am gaining so much more experience. I have learnt that there are more ways to skin the cat, there are two ways for me to win games for the Proteas: I can take wickets or I can keep the batsmen quiet,” Shamsi said.

“As I’ve got older, I’ve realised that taking wickets is not everything, I’ve become more flexible. But it’s also the first time I’m getting regular game time and that’s why you see the consistency.

“For obvious reasons, I didn’t get that before and I’m not disputing selection at all (Imran Tahir stood in his way). But playing regularly, you get to learn quickly from your mistakes and you can implement the good things more. And when things don’t go well, you stay positive through those patches and try and contribute to the team in other ways.”

The inspirational man of the moment has always got as excited as a puppy whenever he takes a wicket, but he has also added a steelier edge now, working on intimidating batsmen. Shamsi admitted that it is a case of being a fast bowler trapped in a spinner’s body.

“From a young age I was a seam bowler, but I was told I was not fast enough so I switched to spin,” Shamsi said. “But my early heroes were guys like Andre Nel, Dale Steyn and Allan Donald. That sort of aggression can disrupt the batsmen and I’m one of the guys in charge of making sure we have a presence on the field and that we never back down.

“It always helps me if the fast bowlers have taken wickets up front, my job is a lot more difficult when they don’t, and whenever I’ve done well, you often see the other bowlers have too, and George Linde too.”