A quality all-round showing by the South Africans ensured there will be everything to play for in the final ODI. 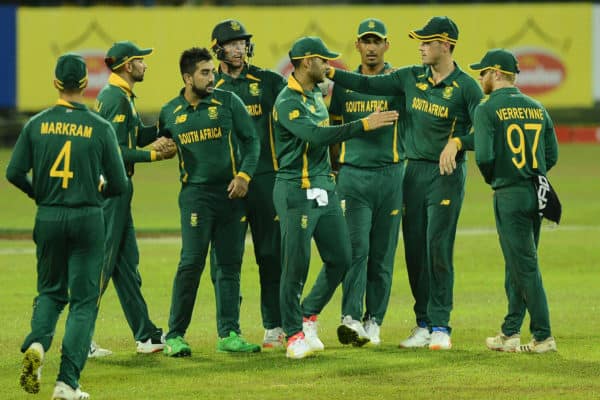 The Proteas celebrate during their second ODU against Sri Lanka in Colombo on Saturday. The tourists won the match to level the series 1-1. Picture: Isuru Sameera Peiris/Gallo Images/Getty Images

South Africa levelled their three-match ODI series against Sri Lanka in Colombo on Saturday, winning the second ODI by 67 runs in a rain-affected match; victory being achieved through the medium of the traditional principles of winning 50-over cricket.

They won the toss and batted first, opener Janneman Malan getting a masterful 121 and the rest of the top-order supporting him in successive partnerships of 43, 96, 38 and 86.

With Heinrich Klaasen providing the explosive finish with his impressive 43 off 27 balls, South Africa were able to post a commanding 283 for six in 47 overs, the match being shortened due to a wet outfield after showers in the morning.

Ace fast bowler Kagiso Rabada then struck twice in the fifth over and, with medium-pacer Wiaan Mulder also chipping in with the new ball, Sri Lanka were rocked early on as they struggled to 19 for three.

And then the South African spinners took over, Keshav Maharaj, on his Proteas captaincy debut, squeezing the batsmen hard with one for 32 in eight overs, and Tabraiz Shamsi bringing his wicket-taking ability to the fore with a career-best five for 49 in 7.4 overs.

It was in impressive all-round display by the Proteas and there were several important contributors who supported the main stars.

Aiden Markram (21) helped ensure a solid start with the bat, before Reeza Hendricks came in and batted with beautiful fluency to stroke 51 off 54 balls and ensure the Proteas took momentum into the middle overs.

Malan went through tough times against spin, but his maturity and class were evident as he battled through and also overcame painful cramp attacks. He has now scored three centuries already in the eight ODIs he has played and he boasts the ridiculous, Bradmanesque average of 104.50.

Klaasen came in at 177 for three in the 36th over and showed intent from the outset and his glovework was also sharp.

Rabada had taken two for 16 in six excellent overs up front, but then sprained his ankle and had to leave the field, but Mulder and Andile Phehlukwayo produced tidy seam bowling as well.

Charith Asalanka threatened to chase down Sri Lanka’s revised target of 265 in 41 overs after another rain delay when they were already four down, as he struck a dangerous 77 off just 69 balls. He and Dasun Shanaka (30) added 64 for the fifth wicket and Chamika Karunatne caused problems as well with his 36 off 23 deliveries before he was outfoxed by Maharaj.

South Africa v Australia at the T20 World Cup: The game changers
15 hours ago
15 hours ago

T20 World Cup preview: The 'good and the bad' of the Proteas
1 day ago
1 day ago

South Africa v Australia at the T20 World Cup: The game changers
15 hours ago
15 hours ago

T20 World Cup preview: The 'good and the bad' of the Proteas
1 day ago
1 day ago