The South African cricket team are ninth in the standings and only the top eight advance automatically. 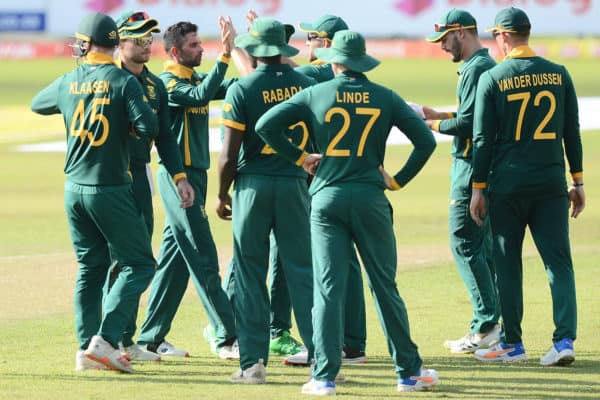 Keshav Maharaj (third from left) says the Proteas are concerned about their status in the qualifying standings for the 2023 World Cup. Picture: Isuru Sameera Peiris/Gallo Images/Getty Images

Keshav Maharaj has been one of the consistently brilliant performers for the Proteas this year and also took to the stand-in captaincy with aplomb, but he admitted that he and his fellow leaders in the squad will be restless sleepers when it comes to automatic qualification for the next ODI World Cup following their series loss in Sri Lanka.

South Africa were beaten by 78 runs in the third and decisive ODI on Tuesday night, meaning they took just 10 points out of a possible 30 from the series. That leaves them languishing in ninth place in the standings, with the top eight qualifying automatically for the World Cup in India in 2023.

Sri Lanka, meanwhile, have leapfrogged the Proteas into fifth place, eight points ahead of them.

“It is a bit concerning, we have to start winning series and taking care of those points,” admitted Maharaj after his team were bundled out in only 30 overs for just 125 runs.

“The first two games were very good in terms of how the batting approached playing spin-bowling, we scored a lot of runs. But tonight (Tuesday) was disappointing and we need to reassess how we bat when the ball is turning a bit more.

“Maybe we need to change our mental strategy and approach, but I’m sure it’s not a lack of skills because the batsmen have worked very hard on that. But also maybe we focused a bit too much on spin and were caught a bit unawares by their pace bowler (Dushmantha Chameera).

“Not many teams lose four wickets in the powerplay and still win, even though I thought 203 was a fair score to chase.”

Coach Mark Boucher admitted to struggling to get the right team balance on the night, with the two seam-bowling all-rounders, Wiaan Mulder and Andile Phehlukwayo, bowling just two overs between them and scoring a combined tally of only 19 runs.

But a fair arbitrator would surely also point to the difficulties caused by quotas when it comes to balancing a team, especially with two black African stars not available in Temba Bavuma and Lungi Ngidi.

And the first question Boucher was asked in the post-match press conference was whether he was happy with the balance of the side from a transformation perspective. To which he simply answered “Yes”.

“We needed to play an extra spinner and that threw us a bit,” Boucher explained.

“But with the rain, Anrich Nortje would have been a handful on that pitch as well. We wanted three seamers too and the batting is full of guys who have been in good form too.

“In hindsight, an extra batsman today would have been nice, but losing four wickets in the first 10 overs means we were always going to be under pressure no matter how deep our batting.”