The 20-year-old bamboozled Scotland's batsmen with his mystery spin on Monday to return T20 best figures of 5-20. 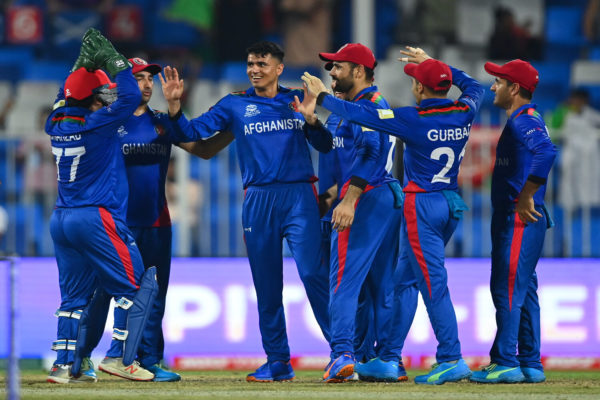 Mujeeb Ur Rahman of Afghanistan celebrates the wicket of Mark Watt of Scotland with team-mates during the T20 World Cup match in Sharjah on Monday. Picture: Alex Davidson/Getty Images

Rashid Khan remains Afghanistan’s original spin king, but Mujeeb Ur Rahman has emerged from his shadow as a rising star to make an instant impact at the Twenty20 World Cup.

The 20-year-old bamboozled the opposition batsmen with his mystery spin on Monday to return T20 best figures of 5-20 in Afghanistan’s 130-run rout of Scotland in Sharjah.

Mujeeb bowls off spin, leg spin and the googly with equal guile and has bagged 30 wickets in 20 matches in the shortest format since his debut as a 16-year-old in February 2018.

“Congratulations to our nation and it’s my first player of the match in a World Cup,” Mujeeb, who played his first ever match in the T20 World Cup, said to his countrymen who have been cheering their team under the new Taliban regime.

“The people supporting us here gave me a lot of positive energy. Fans have been supporting us and that’s one reason we’ve played well.”

Afghanistan cricket has overcome tough odds including the possibility of being banned from the tournament if the women’s game was discontinued by the Taliban.

The players though have set aside the turmoil to focus on the T20 World Cup with skipper Mohammad Nabi saying we are well “prepared”.

Mujeeb, who hails from a humble family in the Khost city of the war-torn region, rattled Scotland’s top and middle order, taking three wickets in his first over including two in successive deliveries.

By the time senior spinner Rashid came into the attack in the seventh over of the Scotland chase, Mujeeb’s heroics – 4-14 in three overs – had already reduced the Scots to 37-5.

He bowled three googlies – a leg spinner that pitches and spins in to a right-hand batsman – to send Scotland skipper Kyle Coetzer, Calum MacLeod and Richie Berrington trudging back to the pavilion.

Rashid took four wickets as the spin duo got nine between them and Nabi said, “The world knows we have some good spinners in the form of Rashid and Mujeeb.”

Former Afghanistan coach Andy Moles had termed Mujeeb a “complete package” and the youngster justified the compliment with sterling performances at the Under-19 stage.

Mujeeb claimed a five-wicket haul in Afghanistan’s historic triumph at the Under-19 Asia Cup where they beat Pakistan in the final.

He finished the tournament with 20 wickets in five matches.

Mujeeb got his big break in the lucrative Indian Premier League when Kings XI Punjab — now Punjab Kings — bought him for $630,000 in the 2018 edition.

He played in Afghanistan’s first ever Test match, against India, in June 2018. The match was also his first-class debut.

The same year Hampshire signed Mujeeb for the T20 Blast alongside Colin Munro of New Zealand.

“Mujeeb, he is a magician. He has got all the tricks in the trade. Very very remarkable young lad. He has every ball you can come across,” said a Hampshire teammate.

Mujeeb recently played in the Hundred for Northern Superchargers.

Mujeeb once said that India skipper Virat Kohli “was his biggest wicket”, but with his career just beginning, Afghanistan will be expecting many more memorable scalps from the prince of spin.