Namibia, ranked a lowly 19, continued their impressive run in the Super 12s after progressing from the qualifying stage. 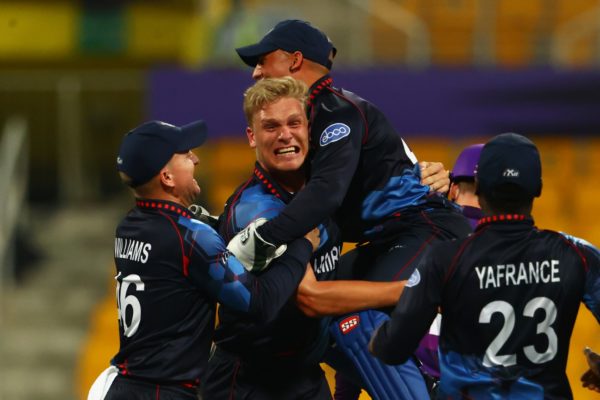 Ruben Trumpelmann on Wednesday termed Namibia’s four-wicket win over Scotland as “massive” after his figures of 3-17 helped them extend their dream run in the Twenty20 World Cup.

Chasing a tricky 110 in Abu Dhabi, JJ Smit made an unbeaten 32 to drive Namibia home with five balls to spare in their first ever Super 12 match of the tournament after they came through the qualifying round.

Smit and David Wiese, who made 16, put on a key partnership of 35 in the low-scoring match to hand Scotland their second loss of the group stage.

Trumpelmann began the show with three wickets in the first over with his left-arm pace and restrict Scotland to 109-8.

“I was nervous out there, but I thought, it’s the World Cup, so why not enjoy it,” said man of the match Trumpelmann.

“I use swing as a weapon up front, so luckily it went my way today. We hope to win a few more, but this is massive for us.”

The left-arm quick justified his team’s decision to bat first as he struck with the first ball and then got two in successive deliveries including Richie Berrington for nought.

Berrington, who was standing in as captain with regular skipper Kyle Coetzer out nursing a finger injury, reviewed the call but replays suggested the ball would have hit the leg stump.

The opening over provided a superb start for a team, ranked a lowly 19, that stormed into the Super 12s after wins over Netherlands and Ireland in the qualifying stage.

“Credit to Namibia for bowling so well early on,” said a disappointed Berrington after seeing his team reduced to 18-4 at one stage.

“At that stage (after the collapse) we just needed a partnership. Matthew Cross played well but unfortunately we didn’t get it going for long.”

Trumpelmann returned his T20 best figures in his sixth international in the shortest format.

David Wiese trapped Craig Wallace lbw for four to rattle Scotland, who lost their Super 12 opener to Afghanistan by 130 runs.

Opener and wicketkeeper-batsman Matthew Cross attempted to stem the rot with Michael Leask but another left-arm fast medium Jan Frylinck bowled him for 19. Cross took 33 balls for the effort.

Leask played a lone hand with his 44 off 27 deliveries before being bowled by Smit.

The bowlers kept up the pressure in the final few overs with Frylinck returning figures of 2-10 from his four overs.

Chris Greaves made 25 and was run out on the final ball of the innings.

In reply, Craig Williams and Michael van Lingen got the team off to a solid start with an opening stand of 28 but Saafyan Sharif claimed the first breakthrough to check Namibia.

He dismissed Van Lingen for 18 and soon Greaves struck with his leg spin to see the back of wicketkeeper-batsman Zane Green, for nine.

Spinners Leask and Mark Watt also chipped in with a wicket to make the chase challenging for the T20 World Cup debutants, but Smit stood firm at one end to extend his team’s dream.

When asked of his team’s chances of qualifying for the semis, a smiling Smit said, “if we qualify for the semi-finals of the World Cup, it will be a massive uproar in the cricket world. We know we can, we are in the Super 12. We are enjoying it.”