‘It’s a tough one’: Boucher gutted after Proteas miss out

The Proteas will have another opportunity to secure the global title at next year's T20 World Cup in Australia. 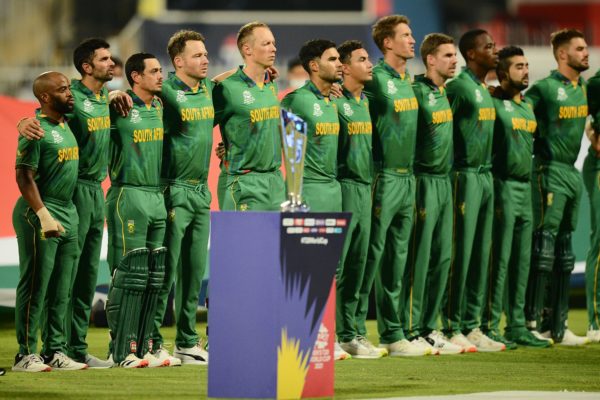 The Proteas team during the national anthem ahead of their match against England at the T20 World Cup. Picture: Gallo Images

“You can’t describe our campaign as successful.”

These were the words of Proteas coach Mark Boucher, who was no doubt still feeling the sting of beating almighty England but not advancing from their pool at the T20 World Cup.

South Africa beat previously unbeaten tournament favourites England by 10 runs in Sharjah on Saturday, but they failed to qualify for the semifinals because their net run-rate (0.739) was lower than Australia’s (1.216), the only team to win against the Proteas.

Having posted an impressive 189/2, South Africa needed to restrict England to less than 131 to make the final four, but their opponents made 179/8.

“We were knocked out, but it’s a bitter pill to swallow because we beat the in-form side in white-ball cricket for the last few years, a very dangerous England side,” Boucher said.

“It’s a tough one. We were under pressure after we lost that first game to Australia and the equation today was very difficult for us to get through, even though we did the job today.

“That was a tight first game, but we just didn’t bat well enough. We lost the toss, it was the first game and we weren’t sure what would be a good total. We thought 160, but 130 would have done the job.

“Maybe we could have gone harder against Bangladesh, but the pitch was going all over the shop and we lost a couple of early wickets. It’s all ifs and buts, and it’s no good starting with those now.”

But the Proteas, considering the disarray they were in a year ago, have given plenty of reason to believe they are on the right track, especially with the next T20 World Cup coming up in less than a year’s time in Australia.

“The team knows they are on a journey, they are on an upward curve and this tournament will stand us in good stead,” Boucher said.

“We did really well in some highly pressurised games. We will take confidence from that and hopefully go from strength to strength.

“We are heading in the right direction and we have won a lot of games lately, even though we unfortunately did not pass the test at this World Cup. I’ve said all along that we are improving.”