Kyle Verreynne and Ryan Rickelton are the favourites to take up the position behind the stumps. 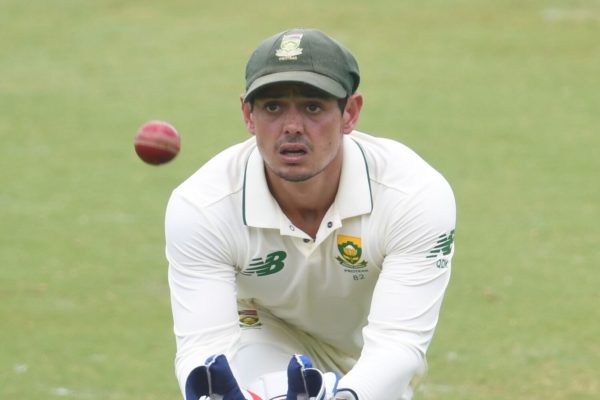 Quinton de Kock is set to miss some of the Test series against India, starting later this month. Picture: Getty Images

Quinton de Kock’s previous absence from the Proteas team caused much discussion on microphones and keyboards around the world, but South Africa’s ace wicketkeeper/batsman is set to miss at least one, probably two of the forthcoming Test matches against India.

He will miss the second Test at the Wanderers from January 3 for a reason that nobody could rationally criticise: The 28-year-old and his wife Sasha are awaiting the birth of their first child and that is due to happen in early January.

But because of the strict Covid protocols the series will be played under, players will surely not be allowed to leave and then return to the bio-secure bubble, meaning De Kock will also be absent from the third Test in Cape Town from January 11.

De Kock’s previous withdrawal from a Proteas match came in controversial circumstances as he pulled out of the ICC T20 World Cup match against the West Indies in Dubai in October, rather than follow a CSA Board directive to take a knee in support of the Black Lives Matter initiative.

This absence will have the blessing of the selectors, however, even though it robs the Proteas of one of their most imposing batsmen.

De Kock’s situation is why the selectors have chosen three wicketkeepers; Kyle Verreynne and Ryan Rickelton being the others in the 21-man squad they announced on Tuesday.

Keegan Petersen also has some experience behind the stumps for the KZN Dolphins.

The strict Covid protocols, with replacements not being allowed to be brought into camp, mean the selectors have had to cover all the bases up front in the original squad.

Verreynne made his Test debut in South Africa’s previous Test series, against the West Indies in June, but Rickelton has been in impressive form for the Central Gauteng Lions with two centuries in three innings and an average of 93.