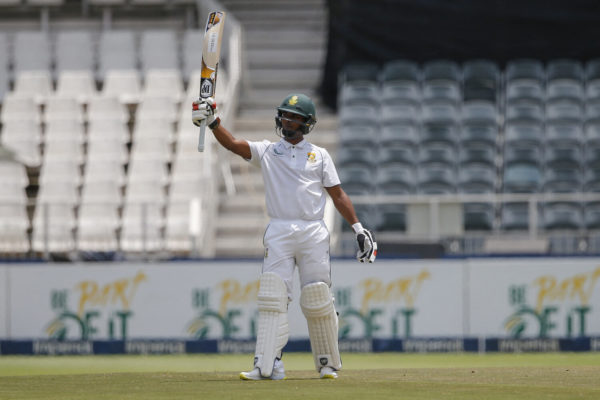 South Africa's Keegan Petersen celebrates after scoring a half-century against India in the second Test at the Wanderers on Tuesday. Picture: Phill Magakoe / AFP

With Mohammed Siraj blacklisted by a hamstring strain and only able to bowl four overs on the second morning, Shardul Thakur stepped up and took three wickets for India, including that of Keegan Petersen, who notched his maiden Test half-century as South Africa stumbled to lunch on 102/4 in the second Test at the Wanderers on Tuesday.

Siraj had limped off the field with one ball remaining of his fourth over on the first evening and bowled a tentative spell on Tuesday morning.

With Dean Elgar and Petersen adding 74 for the second wicket in two-and-a-half hours, India were under the pump a bit as the opening spells of Mohammed Shami and Jasprit Bumrah were seen off, albeit with some good fortune.

But Thakur, India’s fourth seamer, came into the attack in the 19th over of the day and claimed his three wickets in a burst of 16 balls without conceding a run, the Proteas slumping from a comfortable 88/1.

Elgar was the first to go, his 170-minute, 120-ball vigil for 28 runs helping to give South Africa a solid start to the second day. But Thakur then nipped a delivery across the prodding left-hander and had him caught behind.

Petersen reached 50 for the first time in his Test career shortly afterwards, in his sixth innings, and he showed an admirable mix of determination and positivity on Tuesday as he went to 62 with nine fours. But having survived such high-quality fast bowling, and plenty of movement off the pitch, from Shami and Bumrah, perhaps he relaxed a bit against the lesser pace of Thakur.

But the 30-year-old all-rounder was still nipping the ball around and Petersen’s somewhat loose drive, without getting far enough forward, edged the ball to second slip.

Rassie van der Dussen’s dismissal for 1 with what became the last delivery before lunch, was controversial. He clearly inside-edged a delivery that jagged back into him, with extra bounce, into his hip, wicketkeeper Rishabh Pant then claiming the catch diving forward.

Umpire Marais Erasmus gave Van der Dussen out, but replays showed the ball bounced before Pant’s gloves. It was the second time on Tuesday morning that replays showed Pant claiming a catch on the bounce.

It was unclear at the lunch break if the officials would overturn the decision.

Temba Bavuma is at the crease and is yet to get off the mark, and he will need all his famous grit to get South Africa close to India’s first innings score of 202.

The exciting Kyle Verreynne is set to join him after lunch if Van der Dussen does not get the reprieve he deserves.