Chad le Clos given a fright as he sneaks into semis

Meanwhile, Alan Hatherly recovered from a slow start to finish a respectable eighth in the mountain bike cross country race. 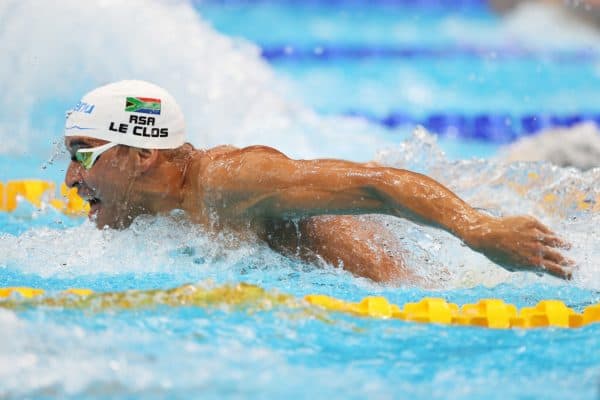 Chad le Clos of South Africa snuck through after the heats of the men's 200m butterfly event on day three of the Tokyo 2020 Olympic Games on Monday. Picture: Davis Ramos/Getty Images

Chad le Clos got off to a shaky start on Monday, opening his third Olympic campaign by snatching the last available spot in the men’s 200m butterfly semifinals at the Tokyo Games.

The 29-year-old swimmer finished fifth in his heat in 1:55.96, ranking him 16th overall in the first round.

Le Clos, who won gold in the event at the 2012 London Games, is hoping to return to the podium after settling for fourth place over four lengths at the 2016 showpiece in Rio.

He will need to wind up the pace in the penultimate round on Tuesday morning, however, if he is to stay in the hunt for a place on the podium.

ALSO READ: Le Clos ‘to go for broke’ in hunt for another Olympic medal

Meanwhile, countryman Ethan du Preez was eighth in his heat in 1:58.50, and he was eliminated ahead of the semifinals.

In the women’s individual medley, Rebecca Meder ended seventh in her heat in 2:14.79, and she also failed to progress.

Elsewhere in the afternoon session on day three of competition at the multi-sport Games, cyclist Alan Hatherly got off to a slow start in the men’s mountain bike cross country race, but he managed to pick up the pace and eventually finished eighth.

“The pace was there. It was just an unfortunate start, but these things happen. I gave it my all and I’ll take that,” Hatherly said.

The Blitzboks remained unbeaten in the group stages of the rugby sevens tournament, winning their second match and securing their place in the quarter-finals.

After defeating Ireland earlier in the day, they held off a strong challenge from Kenya to secure a 14-5 win, with captain Siviwe Soyizwapi and Selvyn Davids scoring first-half tries and Branco du Preez succeeding with both conversions.

The SA squad will face the United States in a dead rubber clash on Tuesday morning, ahead of their first playoff match later in the day.

On the hockey pitch, the national women’s team lost their second successive game.

Nicole Walraven gave South Africa the early lead against Great Britain, scoring in the first quarter, but they let their advantage slip and settled for a 4-1 defeat.

The SA women will face world champions the Netherlands in their next pool match on Wednesday.