Feature: Simbine’s got a real shot at Olympic 100m glory

"My coach and I are feeling confident enough now that we want to go and fight for a podium finish." 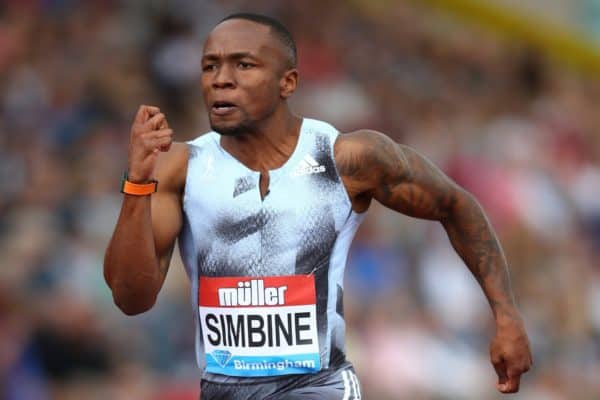 SA sprinter Akani Simbine says he is in good form and ready to challenge for a podium spot at the Tokyo Olympics. Picture: Michael Steele / Getty Images

In 1908, when South Africa entered its first official team at the Olympic Games, Reggie Walker stormed to victory to win one of the most coveted prizes at the quadrennial multi-sport showpiece: the men’s 100m gold medal.

Back then, with only four men turning out in the final, Walker clocked 10.8 (hand-timed).

Simbine, however, believes he’s ready for the mighty challenge that lies ahead.

“I know what I need to do, and I’m here to get the job done,” Simbine said this week ahead of his campaign at the Tokyo Games.

“I’m here to achieve goals I’ve had all my life.”

Born in Kempton Park, Simbine’s first love was football, and though it’s a passion he maintains to this day as a fan of English club Chelsea and local giants Kaizer Chiefs, when his talent as a sprinter was spotted in high school, he ditched his boots for spikes.

Unsure where to turn in search of an expert who could assist in nurturing his son’s natural gift, Simbine’s father found an advert for a coach in the local newspaper and he got in touch with Werner Prinsloo.

Having never previously coached such a prodigious talent, Prinsloo has since learned as much from Simbine as he has taught the stocky speedster, with coach and athlete growing together through the ranks until they found themselves competing for medals and titles at the highest level of international sport.

After linking up with Prinsloo, Simbine turned heads by setting a South African junior 100m record of 10.19 in December 2012, at the age of 19.

And though it took him a few years to emerge as a real contender at senior level, his consistent progress eventually saw him emerge as the one of the fastest men on the planet.

In April 2014, at the national championships in Pretoria, he finished second in a historic race in the men’s 100m final.

While Simon Magakwe stole the show, clocking 9.98 to become the first South African under 10 seconds, 20-year-old Simbine crossed the line in 10.02, and it wouldn’t be long until he broke the 10-second barrier himself.

The following year he ran 9.97 to win the world student title in Gwangju, briefly sharing the SA mark with Henricho Bruintjies. And in a breakthrough 2016 season, he rocketed to victory in 9.89 at a meeting in Szekesfehervar, Hungary to take sole ownership of the national record, which he has held since.

He went on to finish fifth in the 100m final at the 2016 Rio Olympics and he took fifth place again at the 2017 World Championships in London.

In 2018, he took another big step forward, proving his ability to perform under pressure by winning gold at the Commonwealth Games on Australia’s Gold Coast and securing the African title in Asaba.

He missed out on the podium, however, at the 2019 World Championships in Doha, where he finished fourth.

Though he holds a useful personal best of 19.95 in the 200m event, Simbine has concentrated on the 100m over the last few seasons, and he has been rewarded for the decision to focus most of his attention on a single distance.

Having run under 10 seconds for the last seven years in a row, he cemented his place among the medal contenders in Tokyo when he broke the African record, clocking 9.84 at a meeting in Szekesfehervar last month.

He enters the Tokyo Olympics ranked second in the world in the short sprint, and aside from his superb form, he feels he has learned enough in his career to be taken seriously in the battle for gold.

“I am a mature sprinter now,” said Simbine, who will also anchor the SA relay team at the Games.

With seven men having gone under 9.90 this season, Simbine will need to be at his best if he is to outclass his opponents and reclaim the title won by Walker all those years ago.

Despite the pressure he faces, after proving himself with consistent performances throughout his career, he is bursting with confidence ahead of Saturday afternoon’s first-round 100m heats in Tokyo.

“My coach and I are feeling confident enough now that we want to go and fight for a podium finish,” he said.

“I’m ready to fight to be the fastest man in the world.”

Turkmenistan's first Olympic medalist gets a car, apartment and cash
4 months ago
4 months ago

Turkmenistan's first Olympic medalist gets a car, apartment and cash
4 months ago
4 months ago