The versatile Blitzboks stalwart is more than happy to just play in rugby's shorter format and isn't worried about a "lack of ambition". 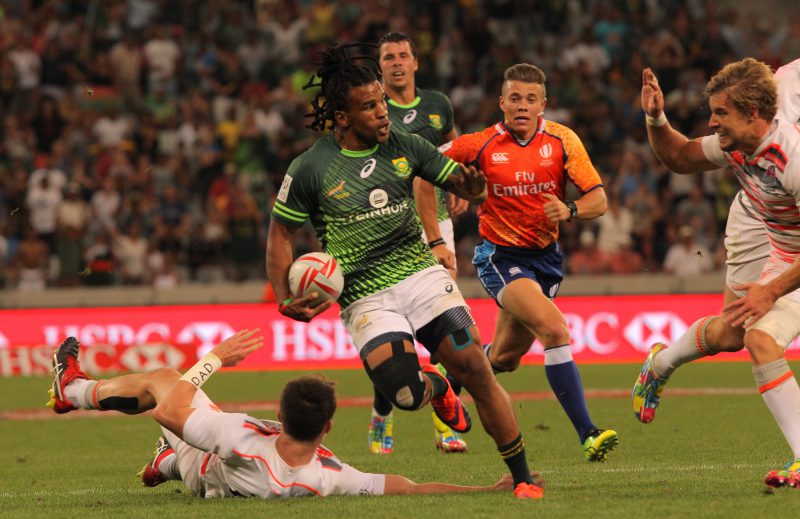 Rosko Specman is more than happy to be considered a sevens specialist. Photo: Petri Oeschger/Gallo Images.

Rosko Specman isn’t afraid to admit that he nowadays only wants to play sevens rugby.

Also read: Seabelo Senatla’s gospel: It’s all about being chilled

Despite the format’s growing stature – it’s an Olympic event after all – some players are still criticised for “lacking ambition” when they ditch 15-man rugby.

Specman, a former Sharks and Pumas winger, had his taste of “proper” rugby for four years and decided the nibble was enough.

“People can say what they want. I just want to concentrate on my career with the Blitzboks,” the 27-year-old said before the side’s departure for this weekend’s Wellington Sevens in New Zealand.

“This is the place where I feel at home. Sevens rugby suits my style of play. That doesn’t make me a more limited player, it’s rather a way for me to maximise my strengths as a player.”

That doesn’t mean Specman is against two of his high-profile teammates, Seabelo Senatla (Stormers) and Kwagga Smith (Lions), focusing fully on making their mark in the 15-man game.

Both players wave goodbye to the Blitzboks for now after they’ve competed in Wellington and Sydney.

“There’s no better place to refine your skills than sevens rugby. The one-on-one attention is amazing and you feel really enriched.

“You’re taught to use space as effectively as possible and good defending is of massive importance. Sea and Kwagga are taking their sevens skills into the 15-man game. They will be hits.”

But that’s not something Specman wants anymore.

He’s more than happy to be the proverbial second-half Super Sub for the Blitzboks.

“Many people have asked me about (Blitzboks coach) Neil Powell’s recipe of sticking to a specific starting team and then using all of the replacements in the second half,” said Specman.

“They wonder if it’s a good dynamic to have in a side. I can say without any doubt it’s a great way of doing things.

“The communication has always been clear. Coach Neil never denies you an opportunity, it’s just the period of the game that is different. People think that second-half replacements are the guys that need to bring energy but that’s not true. You’re expected to always keep up the tempo, whether you start the game or come on later.”

He’s also hoping, of course, to score a magical try against the All Blacks – like the one last month in Cape Town – again.

“I’ve done it twice, so I can’t see why I can score a hat-trick,” he chuckled.