You can trust the powerful Kings flanker on this one as he is one of the few examples of rural players making it to the top. 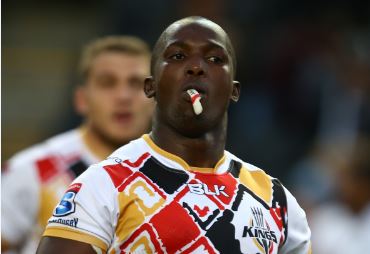 Thembelani Bholi made it to the top by never losing sight of what's important ... and his discipline. Photo: Steve Haag/Gallo Images.

Thembelani Bholi, the Southern Kings’ bulldozing flanker, has pleaded with local rugby unions to do more to promote the game in rural areas.

“I don’t we’re honest if we say enough is being done (to spread the gospel of rugby in rural South Africa),” he said as the Eastern Cape franchise prepare for their Super Rugby opener against the Jaguares on Saturday.

One can trust the 27-year-old’s judgement in this regard.

Bholi isn’t one of the skewed cases of transformation in South African sport – like Kagiso Rabada, Lungi Ngidi or Siya Kolisi, who had privileged and stable schooling backgrounds.

Instead, the hard-working stalwart grew up in Maclear in the Eastern Cape and attended Jamangile Senior Secondary School.

At the back, there’s a lap of land doubling up as a soccer and rugby pitch.

Jamangile doesn’t even have a telephone line – it’s contact number is a Vodacom cellphone.

That Bholi, who played Craven Week two years in a row for Border Country Districts, has made it to the top-flight is down to his own determination and one of the rare examples of the imperfect Kings’ true value to transformation.

If the Kings wasn’t established would he have been spotted?

But Bholi believes it shouldn’t just be down to a “transformation project” like the Kings to promote black talent.

“We need the unions to come out to rural areas and expose youngsters to the game,” he said.

“It’s important for coaches and players to set aside some time and invest in coaching clinics. Even if it’s just to try and plant a seed.”

If anything, you have to make your own luck through discipline, something he prides himself on.

“It’s all about priorities. As a schoolboy, make sure you concentrate on your studies and always deliver your best on the field,” said Bholi.

“It’s the best chance to get noticed.”

Bholi hopes some gymwork on his upper body will see him catch the eye in this year’s campaign.

“When I sustained my knee injury last year, I couldn’t run so I picked up some weights,” he said.

“I consider my ability to carry the ball as one of my strengths. I’m hoping to focus on that this season.”

If Bholi combines that with his tough tackling, he truly could be a star in 2017.