Handre Pollard is a young man used to shouldering burdens

Some might say the level of responsibility entrusted to the Bulls stand-in captain is crazy but history suggests otherwise. 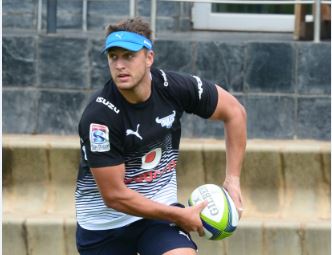 Handre Pollard needs to find his feet as flyhalf again as well as leading the Bulls. Photo: Lee Warren/Gallo Images.

Handre Pollard earlier this week joked that he’s “not a guy made to be on stage”.

That’s a bit of an ironic thing for the Bulls’ flyhalf and stand-in captain to say.

Also read: Handre Pollard better get used to being a saviour in 2017

The 22-year-old pivot hasn’t played a competitive match since the 2015 World Cup.

Saturday’s Super Rugby derby against the Stormers at Newlands is actually the first game he’ll play in the new era under coach Nollis Marais.

He’s expected to regain his form fairly quickly because he need to sort out some of the Springboks’ backline problems.

And, along with all these factors, Pollard also needs to lead the Bulls.

Some might say that’s a crazy amount of responsibility for such a young man.

Pollard captained the Western Province Craven Week side; he was the only 18-year-old in the World Championship-winning Baby Bok team in 2012; he later captained them; he made his Test debut as a 20-year-old and played against the All Blacks in a World Cup semifinal as a 21-year-old.

“I’m used to captaining my peers,” he said.

“But the Bulls captaincy is definitely a step up. It’s a bit harder to lead players who are older than you are. But it isn’t supposed to be a problem if you operate in a great environment. As a flyhalf, you’re mostly in control of things on the field, so captaincy is kind of a natural thing.”

That truly is the talk of a man who is clearly comfortable being in the spotlight.

“Every player has his own goals for the season,” said Pollard.

“Mine are very simple. I just want to get back on the field and play my best rugby. I really want to get back to where I was more than a year back. But I’m not trying to look too far ahead.”

Speaking of team environments, the exciting No 10 admits he was quite lucky with the type of leadership he was exposed to.

“These are men known for their unique leadership qualities and are legends of South African rugby. I learnt lessons from each of them.”

Yet first and foremost, South African rugby needs Pollard to cope with the pressures of the position he plays in.

He’s not concerned though about how the game might’ve changed in his absence.

“I’d love to find out at the weekend,” chuckled Pollard.

“From the outside though, it doesn’t seem as if there have been many changes. The intensity and tempo seems to have remained the same. I can’t wait for another taste.”

Bulls will be ready for 'top-class' Munster, says Elrigh Louw
3 hours ago
3 hours ago

Bulls will be ready for 'top-class' Munster, says Elrigh Louw
3 hours ago
3 hours ago