Allister Coetzee: Transformation is about quality, not quantity

It also explains perhaps why the Springbok coach isn't reaching the targets he's been set by Saru for the next four years. 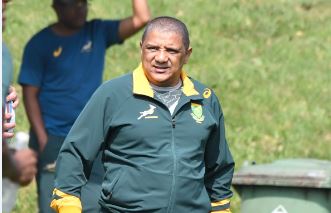 Allister Coetzee isn't going to be sucked in by the populism of transformation. Photo: Wessel Oosthuizen/Gallo Images.

Transformation has been a reality for years, even for the Springbok side.

And if there’s one thing national coach Allister Coetzee believes it’s about quality and not quantity.

The Springboks have been set a transformation targets of at least nine players of colour in the matchday squad by 2019.

Four of those must be ethnic black players.

“I’m of the opinion that we have talented players who need to get the opportunity, that’s what it is about,” said Coetzee.

“For me it’s not about numbers. It’s about getting talented players, white and black, or should I rather say black and white, into our mix, giving them opportunity and backing them.”

Despite criticism last year for not reaching his targets, Coetzee insists he has never shied away of giving players of colour opportunities, as long as it was based on merit.

“I’m not scared to give players opportunity. I even invited young guns to the camp but they also have their Under-20 camp. Talented players like Curwin Bosch and Embrose Papier are being looked at,” he said.

Coetzee, desperate to improve on his record of four wins in 12 Test matches, recently went on a fact-finding mission to the United Kingdom as part of his more thorough planning process for this year.

“The logistical planning is done, where we are flying, which airlines you flying with, where we are staying, that’s done and dusted,” he said.

“I went on a recce tour to the UK … I spent eight days there.”

The Bok mentor though doesn’t want high expectations to be limited to the national side.

“I know expectations are high and with Boks it’s a massive thing. So what I’ve learned is that every Test match is so vital to win, regardless who you play. This is the view and philosophy I have and it will stay like that.”