Clinical Jaguares hand Johan Ackermann's side a rugby lesson and also expose certain cracks in their attacking style of play. 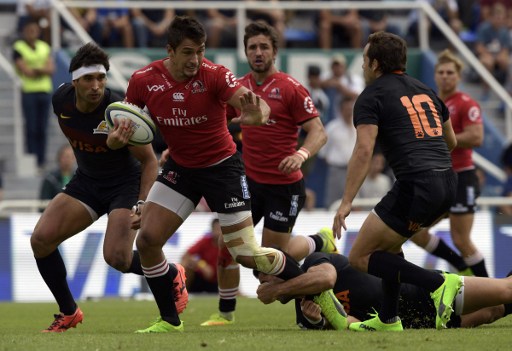 Lions centre Harold Vorster made some powerful runs but he was thwarted by the superb Jaguares defence. Photo: Juan Mabromata/AFP.

The Lions got taught a rugby lesson as their Super Rugby campaign hit a wobble on Saturday night when they were played off the park 36-24 by a dominant Jaguares in Buenos Aires.

They could argue they were left frustrated by some of the calls from the officials but they also lacked their normal intensity and ability to dominate the contact zones.

Despite both teams scored four tries each, it doesn’t tell the full story as the Lions battled from the word go to stay in the contest as the Jaguares’ aggressive defence had them in sixes and sevens throughout.

The Lions also scored two of their four tries in the last six minutes at a time when they were already trailing 36-12 – both from mauls.

The introduction of Jaco Kriel, Faf de Klerk and Andries Coetzee made a slight difference but by then the game was lost.

The inconsistency though of referee Nick Briant was best illustrated on the stroke of halftime when Jaguares flyhalf Nicholas Sanchez made contact with his knee in Lions wing Anthony Volmink’s face yet only a penalty was awarded.

In the second half he dished out another yellow card to Lions hooker Robbie Coetzee for an alleged neck roll and it became clear it won’t be the Lions day.

The Jaguares, as expected, started the game with huge passion and had the Lions under immediate pressure, resulting in their opening try by fullback Joaquin Tuculet in the fifth minute.

Sanchez stretched the lead to 8-0 with a penalty before the Lions finally got on the board with a try by captain Warren Whiteley who ran the perfect angle after centre Harold Vorster was just short seconds earlier.

The Jaguares made full use of their territorial advantage to score their second try through wing Ramiro Moyano for a 15-7 lead before two more penalties by Sanchez gave them a handy 14-point cushion at the break.