Robert du Preez's young home side leave it late against the Jaguares but show pleasing character and calmness at Kings Park. 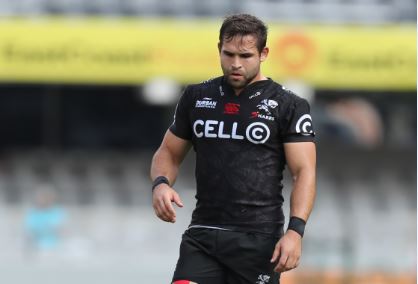 In an error-ridden game that never reached any great heights but provided big intensity on defence, the Sharks got their Super Rugby campaign back on track by getting the better of the Jaguares at a humid Kings Park on Saturday afternoon.

Outscoring the visitors by two tries to one, the Sharks won 18-13 after leading just 8-6 at the break, but countless handling errors and unforced errors would have frustrated coach Robert du Preez.

Sharks scrumhalf Cobus Reinach crucially scored the game’s opening try in the sixth minute through an intercept for the first points of the game with the Jaguares strong on the attack.

While he made himself guilty with an early but try-saving neck tackle on Jaguares centre Jeronimo De la Fuente, his workrate was extremely high. He got in the faces of the Jaguares with his defence and gave direction at a stage when flyhalf Inny Radebe was struggling at pivot.