The former Springbok coach also believes SA rugby urgently needs a director of rugby again ... and he has a perfect candidate in mind. 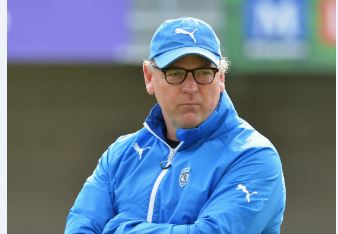 In a column for All Out Rugby, the World Cup-winning mentor praises administrators for, once, not burying their heads in sand.

“We often criticise rugby’s leadership, but the fact that Sanzaar have identified a problem, and are trying to resolve it, is a massive boost,” White wrote.

“The decision-makers have taken on board what they’ve heard from the stakeholders and, in this case, the message is clear – less is more.”

The South African Rugby Union (Saru) on Tuesday confirmed its franchise sub-committee has started developing criteria to determine which teams get the chop.

It’s understood that the Kings and Cheetahs are in danger.

White, who’s finishing a three-year stint with French club Montpellier, doesn’t pretend to know which team he thinks should go.

“Deciding who gets cut is difficult …  I don’t have the answers,” he wrote.

“I do know that you’re going to have stronger teams with more depth, and the competition will be better because you’ll be playing strength versus strength.”

White’s argument for just four local teams centres heavily around the central contracting of the top 160 players in the country.

“We’re going to have to find a way to keep our top 160 players in the country. We also need to make sure that they’re all taken care of, well coached and that they’re all happy with the set up,” he wrote.

“The challenge, in terms of sustainability, is to make sure that the next tier is up to scratch so that there’s not a void left behind when those 160 players move on.”

Central contracting would also mean Saru has the final say over the management of the players.

However, such management requires an experienced administrator to oversee the process.

“Maybe we need a director of rugby, someone like Rassie Erasmus. He can determine who the coaches are, balance the squads and coaching staffs, and put the various structures in place.

“You need a director of rugby to make sure there are pathways for players and coaches to progress along.”

Erasmus is currently the director of rugby at Irish side Munster and has been linked with a return to South Africa over the past few weeks.

Sharks boss satisfied, full of praise for returning Boks after Bulls win
13 hours ago
13 hours ago

Sharks boss satisfied, full of praise for returning Boks after Bulls win
13 hours ago
13 hours ago