Nutshell: Sharks and Rebels both star in a horror show

Super Rugby witnesses one of its poorest games in decades as these two hapless sides end up, deservedly, sharing the, erm, spoils... 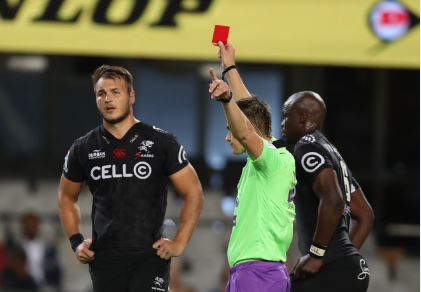 Andre Esterhuizen was given a straight red card for a tip tackle. Photo: Steve Haag/Gallo Images.

13 years ago, the Sharks were involved in one of the worst games in Super Rugby history – a 5-6 loss to the Reds.

On Saturday evening, they tried to provide another contender for that dubious honour with a 9-all draw against the Rebels at Kings Park.

There’s no way around it: this was an appalling game of rugby.

23-year-old flanker Will Miller recently signed a short-term contract with the Rebels, only because of the side’s injury crisis.

He’s a dairy farmer in New South Wales, who wakes up at 4am and drives two hours to train with his club, Northern Suburbs.

On Saturday he made his Super Rugby debut and proved his club coach – who said he’s a brilliant fetcher – right.

Miller was a nuisance – making 8 tackles and making an incredible 4 turnovers. One of those was the penalty that helped the Rebels draw.