Franco Mostert: The roar of the Joburg pack 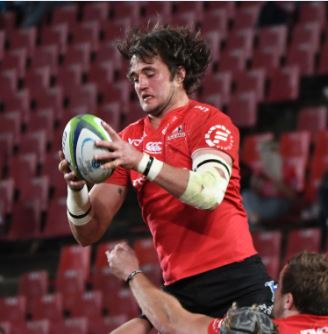 The rock stars on the rugby field are positions normally reserved for your flashy guys. Lions fans go ga-ga when Courtnall Skosan sweeps down the touchline, when Elton Jantjies kicks opponents to the curb or when Jaco Kriel rams defenders out of his way.

But one of the Lions’ standout players on their way to today’s Super Rugby final against the Crusaders at Ellis Park is someone who often stays below the radar.

One who clears the stage for the front men to thrill the audience. He hasn’t scored the most tries, or slotted the most kicks or come close to beating the most defenders.

But nonetheless, lock Franco Mostert is worth his weight in gold. Besides the 1.98m and 105kg forward’s tireless work in the scrums, lineouts, rucks and mauls, he is also incidentally the Lions’ top tackler over the past two seasons.

Mostert, nicknamed “Sous” in reference to his surname, didn’t take an easy route in establishing himself as one of the top locks in Super Rugby.

The lanky forward faced an uncertain future after a serious car accident four years ago, following his move from the Bulls to the Lions.

“He’s worked so hard to be where he is, especially after he broke his hip in that car accident in 2013,” recalls Lions coach Johan Ackermann.

“He’s a great character and a real energiser in the team. He gets that pack fired up. “Franco’s come a long way. I remember watching him playing Varsity Cup rugby for Tuks and I remember him arriving here from the other side of the Jukskei.”

Ironically, his elder brother JP, a Valke lock, was also involved in a serious car accident on the Friday night before the Lions were due to face the Sharks in the quarterfinals three weeks ago.

It culminated in the Lions devoting the match to Franco’s distressed sibling.

JP broke his neck after his bakkie rolled and might never play rugby or even walk again and obviously Franco doesn’t really want to talk about it, apart from saying it’s been really tough on JP’s fiancee, Zandre (van der Walt) and his mom, Jannet.

After making his Springbok debut last year and earning seven caps as replacement, it was only this year he announced himself on the international scene after his stellar performances for the Lions made it impossible for the Bok selectors to leave him out of the elite XV.

He returned their faith in them with three outstanding performances against France in July, during which he made fans take notice of his incredibly high work rate.

Mostert almost gave up on his Bok dreams when he joined French Top 14 side Lyon prior to the 2016/2017 season on a two-year contract, but then opted out of the deal, joining the Ricoh Black Rams in Japan instead.

“A lot of dreams and goals I set came true last year. It was a big dream to turn out for the Boks,” said Mostert, born as Francois John in Welkom in 1990.

“It’s every young kid’s dream to play for the Boks one day and when it becomes a reality, it doesn’t just stop there. I think every guy wants to play 50 or 100 Tests for the Boks once he has played his first, just to make your country proud.”

For the moment, it’s unfinished Super Rugby business as the Lions try and go one better today after losing last year’s final 20-3 to the Hurricanesin Wellington, New Zealand.

“It was a dream come true to play in last year’s final and it was a good year for us,” said the 26-year-old Mostert, who is also a keen golfer and plays off a scratch handicap.

“But we were working hard to get there again and want to make the fans proud after letting them down in the final of last year.”

Off the field, there has also been plenty of highlights over the past few years for the Lions’ trojan. Getting married to his childhood sweetheart, Juan-Ri (Grobler), and the birth of his daughter, Joia-Belle, on March 29 are moments he holds in higher regard than all his rugby accolades put together.

“Becoming a father was no doubt even a bigger event in my life than becoming a Bok, which was a childhood ambition,” he said.

He began dating Juan-Ri in grade 8 and they attended their matric dance together, but it wasn’t until she enrolled at University of Pretoria, where he reached three consecutive Varsity Cup finals with Tuks, when they became inseparable.

He recalls one special night when he bought her coffee and they roasted marshmallows over a candle. On December 12, 2015 they tied the knot.

Mostert might not be the one dancing behind the microphone, but like the case in any good rock band, the Lions’ roar will have far less impetus without his invaluable contribution with the bass guitar.