The Springboks winger made a big breakthrough last weekend against Argentina but the journey towards that was a hard one. 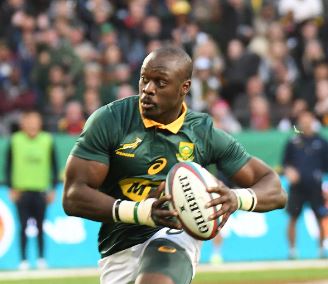 Raymond Rhule is up and running in the try-scoring column. Photo: Wessel Oosthuizen/Gallo Images.

For Springbok right wing Raymond Rhule, the ice was finally broken when he scored his first try in Test rugby in the Rugby Championship against Argentina in Port Elizabeth last weekend.

Rhule, 24, said it was amazing to have scored his first Test try, even though he had to wait four games for it.

Also read: Springboks not bothered at all playing in red, says Jaco Kriel

“You start wondering is it ever going to come, but it did and obviously we work hard as a unit to get better,” he said.

That leaves left fullback Andries Coetzee in the back three as the odd one out.

“So Courtnall and I feel relieved, sorry for Andries who hasn’t got his first try yet. He came close on a few occasions.

“But the nice thing is that we shared that moment with a lot of guys. It’s really amazing how we became brothers and care for each other.

“It was an amazing feeling but even more special to share it among the other guys,” he said.

In hindsight, it was one conversation with Cheetahs director of rugby and Springboks assistant, Franco Smith, that changed his fortunes.

“It wasn’t easy, I’ll be honest, if you expect a lot of yourself. For me the difference was when I spoke to coach Franco and said I want to be a Bok again.

“He asked me what has been the difference between then and now and I told him I used to enjoy my rugby. He said ‘well go and enjoy it again’ … and here I am.”

Rhule said between the June series and the Championship they kept in touch and with the Lions doing so well in Super Rugby said it was just amazing how the guys were all just wishing them the best.

“They fell at the final hurdle but we all said we are trying to give the Lions players one better as a team.”

Rhule became a Bok tourist in 2012 already but had to wait five years to make his Test debut.