Springboks: Perfect time for Hougaard to show true worth

The experienced scrumhalf is the only change for Saturday's Test against Argentina but he has a chequered past at No 9. 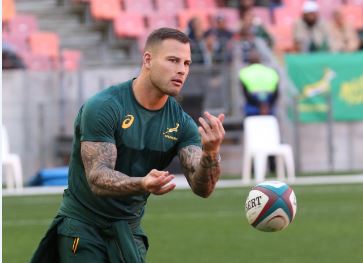 Francois Hougaard needs to show he can handle being on the back foot at international level. Photo: Richard Huggard/Gallo Images.

It’s not really surprising that the only change to the Springboks’ starting XV for Saturday’s Rugby Championship Test against Argentina in Salta is one of the few talking points.

With Ross Cronje staying behind with an ankle injury, it’s up to scrumhalf Francois Hougaard to organise the backline with halfback partner Elton Jantjies.

A 43-cap veteran is, on paper, exactly what the Springboks need to fill that void.

For starters, Hougaard is the only overseas-based player in the current group.

That means the 29-year-old grabs extra attention, especially since many rugby fans are rejoicing that the locally-based players are performing well.

In other words, popular perception at the moment is that the Springboks actually don’t need overseas stars.

Hougaard will truly have to pull the strings effectively.

Another factor to consider is his chequered past as a scrumhalf at international level.

Hougaard is a fine attacker and good defender but his game management under pressure is still a tad wobbly.

And it’s a safe bet the Springboks won’t have it all that easy against the passionate home side.

Most of Hougaard’s finest moments in the Green-and-Gold have actually come as a wing but with new wisdom garnered from two seasons in England, he could right that wrong.

At least he has the full backing of coach Allister Coetzee.

“Francois has played a lot of Test match rugby, his work ethic is second to none and he has been working hard up to now since joining the squad,” said Coetzee.

Rudy Paige will come into the side as replacement.

“Rudy made a good impact in the third Test against France and I expect the same from him this weekend.”

Given last week’s good start in Port Elizabeth, the Springboks will try to keep things simple.

“This is going to be a different challenge but I have no doubt the players will benefit and grow from every tough experience,” said Coetzee.

“Our approach and preparation will be just the same as when we prepared for all our home Tests, and to control whatever we can control. We must again show patience, hunger and the desire to execute our game plan.”