Wounded Lions find themselves in a ‘surreal’ situation 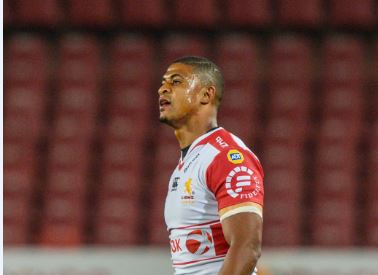 Anthony Volmink has been one of the 'victims' of inconsistent refereeing in the Lions' campaign. Photo: Sydney Seshibedi/Gallo Images.

Indeed, given their success over the past few years losing four from five matches in the Currie Cup to date is uncharted.

Also read: Swys de Bruin: I can’t just throw a ton of bricks on my Lions

As a result, De Bruin has thrown caution to the wind and named five changes to his team on Thursday for their next date against the Free State Cheetahs on Saturday in Bloemfontein.

“Every loss is disappointing, especially after winning for three years has become a part of us,” said De Bruin in reference to last weekend’s 39-3 drubbing against Western Province at Newlands.

“What was most disappointing is that we dominated possession and territory in the regions of 65% plus, but credit to Province.”

The Lions are now in a tricky position.

While it will always their goal to be successful in the competition, they also have the broader picture in mind.

“Of course we always want to win, but we are also looking at this competition to build depth for next year’s Super Rugby campaign,” said De Bruin.

“I’m proud of the boys and we will stay with our processes. I don’t want to put pressure on the guys by telling them we have to start winning all our games now.”

Discipline, at face value, seems like a problem for the Lions after two crucial cards in the last two matches but it’s actually a source of frustration.

The culpritys, Robbie Coetzee and Anthony Volmink, were later found not guilty of their transgressions after their hearings.

“All we want is fairness, especially when these two incidents were thrown out afterwards. Penalties could have been the way to go,” said De Bruin.