Currie Cup: Lions roar late to sneak into the semifinals

Swys de Bruin's troops find their attacking rhythm in the second half against a tough but error-prone Pro14 Cheetahs team. 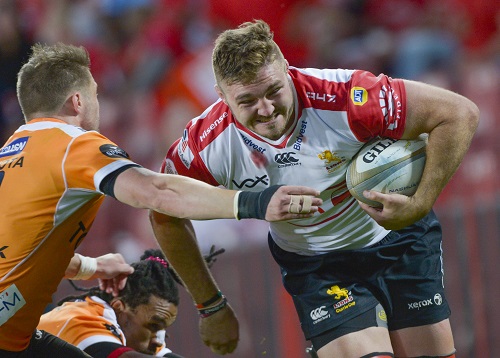 Cyle Brink had an excellent outing for the Lions. Photo: Sydney Seshibedi/Gallo Images.

Despite having four tries disallowed the Golden Lions scored another five to storm into the Currie Cup semifinals, knocking out defending champions the Cheetahs 44-17 at Ellis Park on Saturday night.

Leading 13-10 at the break, the Lions went into overdrive and was it not for all the small errors, the score could have turned real ugly for the badly outplayed visitors.

They will now face Western Province in the one of next weeks’s playoff matches, who surprised the Sharks by winning 31-20 in Durban and thereby securing a home game in Cape Town.

In the other semifinal the Sharks – who finished on top of the log by some distance – will host the Blue Bulls.

Flyhalf Jaco van der Walt, who added 17 points, excelled after being moved back to the pivot position after he played fullback for the majority of the competition. He was on song with his place kicking and was probably unlucky to have a try disallowed when Lions replacement hooker Malcolm Marx was ruled to have juggled the ball forward in mid-air touching a fellow player.