Coach Allister Coetzee seems to be seriously considering the Bulls pivot against Ireland but where does that leave Elton Janjties? 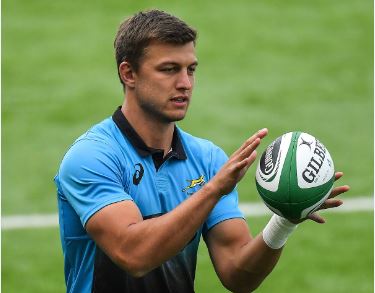 Handre Pollard looks set to take over the No 10 jersey for the Springboks. Photo: Brendan Moran/Sportsfile/Gallo Images.

In a bold move, Springbok coach Allister Coetzee is contemplating giving Handre Pollard a first start at flyhalf in two years for this weekend’s Ireland Test in Dublin.

Pollard had been given a run twice from the bench this year but hasn’t started since the 2015 World Cup in England. Coetzee hinted however that because Elton Jantjies joined the team late from his club commitments in Japan, it could count against him.

“We have to look at a situation where Elton hadn’t been able to train with us the week before we departed for Dublin,” said Coetzee.

“Then Handre trained with us for the last three weeks, so we’ll have to look at what’s best for the team and will be guided by our second day of training.”

It was significant that Pollard and Damian de Allende trained in the 10/12 combination at the Donnybrooke Stadium in Dublin which could serve as an indication they could both start against the Irish.

With the Boks also likely to opt more for a tactical kicking game in the challenging northern hemisphere conditions, there is a belief that Pollard’s approach could serve the team better.

“Our ability to adapt to the conditions, and how we want to play, will be tested. I know that up here (northern hemisphere) there will be many contests, and the aerial bombardment will be one of them,” said Coetzee.

What Coetzee might also be looking for is a 10/12/13 combination that served the Boks so well in 2015, with outside centre Jesse Kriel resuming his midfield partnership with De Allende.

Coetzee believes Ireland are really a top-class side with an experienced coaching team and quality players, saying there is no doubt the Boks will have to be at their best on Saturday.

“In that respect Ireland have a great weapon in their halfback pair as both are prolific kickers, and as a combination, they are world-class,” said Coetzee.

“It will be important to win the many small battles and our focus will be to improve our execution in all departments.”

Are the Springboks doomed in Dublin (again)?