The pressure mounts on the Allister Coetzee regime as Ireland canter to a shockingly easy win in Dublin against poor opposition. 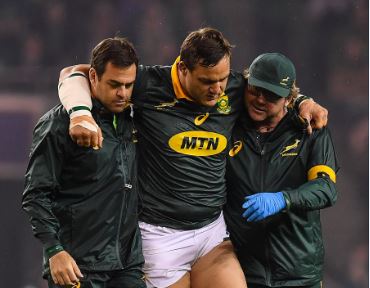 Coenie Oosthuizen's early injury setback was a sign of things to come for the Springboks. Photo: Brendan Moran/Sportsfile/Gallo Images.

The Springboks staggered in the face of a vicious and hugely passionate defensive Irish onslaught in Dublin to fall to a record 38-3 defeat in their opening game of their European tour on Saturday night.

While referee Ben O’Keeve maybe allowed the Irish a lot of leeway on the offside line, the home team were full value and kept the Boks pointless in the first half to storm to a 14-0 halftime lead.

The only times in the first half that South Africa remotely looked like scoring an out-of-sorts centre Damian de Allende kicked the ball away with an overlap to his mercy, while a wild pass from flank Siya Kolisi failed to find the waiting hands of wing Courtnall Skosan.

There was an increase in the Boks’ intensity in the second period when prop Steven Kitshoff, centre Francois Venter and flyhalf Handre Pollard were sent on but the ability of Ireland to dominate proceedings at the breakdown and bossing the gainline killed off any thoughts of a Bok fightback.

Ireland flyhalf Johnny Sexton showed his experience and kept the Boks under the cosh with his brilliant tactical kicking and his uncanny ability to read the game supremely. His scrumhalf Conor Murray was equally good as they kept the Boks guessing and scrambling.