Five changes the Springboks absolutely must make for France Handre Pollard surely has to show his mettle in the No 10 jersey. Photo: Brendan Moran/Sportsfile/Gallo Images.

The Springboks’ latest humiliation under Allister Coetzee is compounded by the fact that he keeps being loyal to players who are clearly underperforming.

Thankfully though, the national coach seemed to suggest on Monday in Paris that changes to the team are on the cards.

But it shouldn’t just be a possibility, it must happen!

Here are five changes the Boks desperately need to make for Saturday’s Test against France.

The experienced No 8 has finally been picked, now he needs to be in the starting line-up from the get-go.

With Du Toit out with concussion, there’s no reason to keep on picking guys who don’t specialise in a position.

Vermeulen has proven class and his experience is a must. 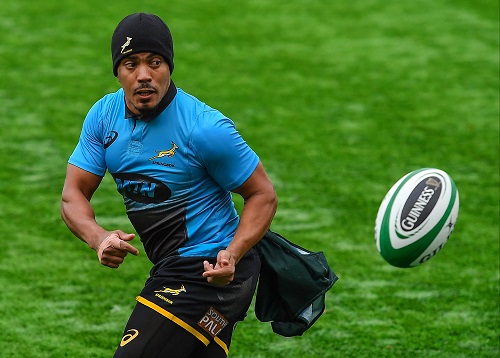 But Cronje’s time is surely up after a string of mediocre performances in the Green-and-Gold and while critics are sceptical about Paige’s international credentials, we can’t say for certain he couldn’t do a decent job.

The Bulls halfback hasn’t been given a fair chance in the Bok jersey and at least deserves more than 15 minutes.

Paige is known for being one of the local scrumhalves with the quickest service in the domestic game.

Just that could already make a difference.

There really shouldn’t be any complaints about a change like this.

Jantjies has been afforded more than enough opportunities in the last two years and simply can’t muster the consistency of a successful international flyhalf.

Like Paige, Pollard hasn’t played much but there have been glimpses of  nice touches.

He set up a brilliant Jean-Luc du Preez try against the All Blacks at Newlands and immediately found more space on the gainline against the Irish.

Also, his boot is bigger than Jantjies’ – a must in Europe. The pundits in the SuperSport studio laid into De Allende and Kriel after last weekend’s nightmare.

It was even suggested De Allende wouldn’t be a good touch rugby player.

Indeed, that centre pairing simply doesn’t possess the ability to create play in midfield as they seem to lack top-class rugby intelligence.

Francois Venter, as a stalwart for the Cheetahs, is the closest the Springboks have to filling the Jan Serfontein void while Coetzee said publicly stated Am is a “clever player”.

Surely it’s time to show some faith in them. De Jager doesn’t get the credit he deserves for his past two performances in a Springbok jersey.

The genial Bulls lock isn’t ever going to be a flashy, world-class performer but he compensates for that through his work ethic.

However, when you do have a versatile and more exciting performer like Mostert in your ranks, you should pick him.

Mostert is an so-called energiser bunny, who keeps going at 100% throughout and perhaps even lifts his intensity in the latter stages of a game.

That’s how well conditioned the Lions lock is.

Rather have him on the field for 80 minutes, instead of 20. He will last.