Upbeat Springboks might have holes to fill for Italy

Siya Kolisi is in South Africa this week while Eben Etzebeth and Malcolm Marx are concerns. They don't even have a defence coach this week! 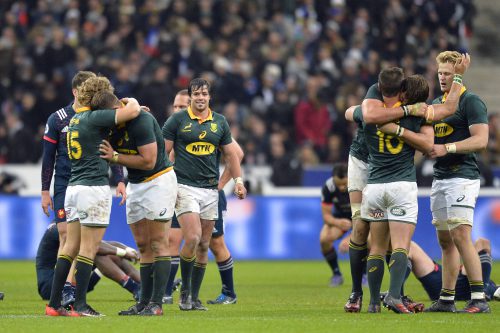 The national team’s performance was just what the doctor ordered, according to embattled coach Allister Coetzee, after the Springboks’ valuable but narrow 18-17 win over an erratic France side in Paris at the weekend.

It was Coetzee’s second away win in 11 games, and the squad’s first win on their end-of-year tour.

It was also their fifth straight win over the French, who carried a provocative “World Cup 2023” logo on their chests.

“That’s what you need if you don’t win your first game on tour, to bounce back and win the second one, and now there’s two more left,” Coetzee said.

“I’m relieved but very proud of the character the guys showed to stick it out and get a close win after it went against us on three occasions earlier in the season.”

Coetzee, however, was left with a few headaches before the next challenge against Italy in Florence this weekend.

There was a concern over the leg injury of captain Eben Etzebeth who left the field towards the end of the game.

No 8 Duane Vermeulen replaced him as captain and would seem the logical choice should Etzebeth not recover in time.

Flanker Siya Kolisi was also returning home for the birth of his second child this week.

Among team management there would be some additional holes, with lineout coach Johann van Graan finishing his term with the Boks last week, and defence coach Brendan Venter juggling his commitments as a consultant with the Italian national team.

Coetzee, who might not keep the wolves from the front door but bought himself a bit of breathing space with a crucial victory, believed a few areas had hindered their progress against France.

“Between the 10-metre lines we tend to overplay it a bit, and we again overplayed it,” he said.

“But credit to the players for being good with ball-in-hand and creating opportunities. Unfortunately it didn’t stick again but it’s a good base to work from.”

Though he was not too concerned about the erratic goal-kicking from flyhalf Handre Pollard, Coetzee pleaded for accuracy in other areas.

“The lineout in the beginning was a bit of a mess, but eventually we got it right,” he said.

Meanwhile, hooker Malcolm Marx will have a scan on his injured shoulder on Monday.