There’s a sting in the Springboks’ tail but …

One of their biggest weapons remains a doubt for them as they prepare for revenge against Italy this weekend. 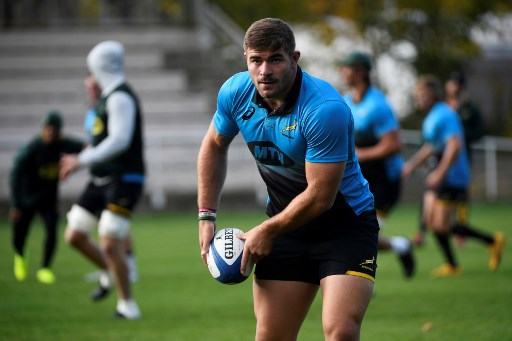 Malcolm Marx has been given the maximum amount of time to recover from his shoulder blow. Photo: Lionel Bonaventure/AFP.

Captain Eben Etzebeth’s chances to still lead the Springboks this weekend in Italy in Padova improved dramatically, but there’s still doubt on the availability of star hooker Malcolm Marx.

Etzebeth injured his lower leg against France in Paris last weekend, while Marx injured his shoulder, but fortunately flank Pieter-Steph du Toit is ready to return from concussion.

“The X-rays we did on Sunday on Eben all came out normal, we expect it just to be a soft tissue injury,” said Bok team doctor Konrad von Hagen.

“We will manage it accordingly and he has a good chance to play.” Marx went for an MRI scan yesterday, which showed no major damage to the shoulder injury he sustained in Paris.

However, there was some soft tissue bruising and he will be given as much time as possible to recover.

Du Toit, the top Bok performer in the lost cause of the opening game against Ireland, missed last week’s action against France due to concussion, but is set to return for the penultimate tour game in the absence of Siya Kolisi.

“Pieter-Steph is busy with the last steps of his return to play protocols but I expect him to be available for selection,” the team doctor said.

Springbok head coach Allister Coetzee was especially pleased to have Du Toit back in training: “It’s great to have Pieter-Steph back because he was excellent for us prior to the concussion.

Coetzee is positive Etzebeth will lead the “strongest available line-up” on Saturday.

“The whole idea for us this week is to play with our strongest possible team so that we can build more momentum and continuity,” he said.

Coetzee said there will be opportunities for the wider group in the last match because that one falls outside the international window.

“Which means that for the Wales Test, players based overseas, such as Duane Vermeulen (France), Francois Louw (England), Elton Jantjies and Franco Mostert (both Japan), will not be available for selection.

“That would obviously give opportunities to other players,” he said.

Upbeat Springboks might have holes to fill for Italy