How Hacjivah the ‘achiever’ made his mark in seconds

The 20-year-old Lions loose forward provided one of the highlights of the opening round of Super Rugby with a superb cameo. 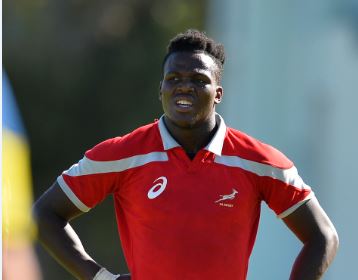 In a couple of telling seconds, promising young flank Hacjivah Dayimani emerged as one of the Lions’ heroes in their narrow Super Rugby win over the Sharks at Ellis Park last weekend.

One of the finds of last year’s Currie Cup, it was Dayimani’s great steal on the ground late in the game in his Super Rugby debut from the bench which denied the surging Sharks in their push for a draw.

Afterwards Lions coach Swys de Bruin said Dayimani – his name is pronounced “achiever” which quickly became his Lions nickname – probably didn’t realise himself “what a big moment in the game it was”.

“It all happened so quickly. I actually just wanted to slow the ball down and the next moment there was a chance to steal the ball so I went for it,” said the 20-year-old former Jeppe pupil.

“And then all the guys just swamped over to congratulate me, it was a great moment and feeling.” Dayimani said they knew it was going to be tough against the Sharks with quality players like Beast Mtawarira and Curwin Bosch on the bench.

“But this weekend is another challenge against the Jaguares. They have a lot of international players,” he said.

Daymani said while they are all brothers at the Lions, players like lock Marvin Orie, wings Aphiwe Dyantyi and Madosh Tambwe are probably the closest to him.

“With Marvin I am learning all the little details of forward play, while me, Aphiwe and Madosh count among the youngsters in the side so we all have something in common and we learn a lot from each other,” he said.

“I was extremely thrilled with the great try Aphiwe scored last weekend.”

At 1.88m and 98kg Dayimani can play 6, 7 and 8 and is being groomed as forming the back-up to players like Jaco Kriel, Kwagga Smith and captain Warren Whiteley.

“I learn a lot from players like that and I must say at this stage coach Swys de Bruin is also keen to use me out on the wing,” said the bundle of energy.

Super Rugby XV of the week: Battle of the carnivores