Discipline the key for Lions against unpredictable opponents

The Stormers showed last week that it's not a good idea to concede yellow cards against the Jaguares. 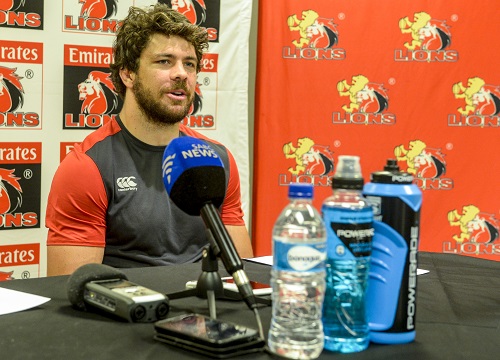 The Lions put huge emphasis on discipline before facing the Jaguares, who have become a bit of a bogey side for them, in their next Super Rugby fixture at Ellis Park on Saturday, Lions coach Swys de Bruin said.

The team showed just one change with lock Andries Ferreira returning after pulling out with a stomach bug on the eve of last weekend’s 26-19 win over the Sharks at Ellis Park.

“If you can keep hand on ball against the Jaguares you can maybe force them into mistakes like disciplinary errors,” said De Bruin.

“But we will focus on fantastic discipline. It’s one of the values we have aimed at, to make good decisions and not concede unnecessary penalties.”

Lock Marvin Orie, who was a late replacement for Ferreira last week, has been rested, with Lourens Erasmus retained on the bench, while a Super Rugby debut awaits 21-year-old scrumhalf Marco Jansen van Vuren on the bench after he was named to replace flank Marnus Schoeman.

“I would like to maintain continuity especially when the team has won, but we will also look at giving guys like Marco in the wider squad an opportunity,” said De Bruin.

“The Jaguares would want to build on their performance against the Stormers,” said Whiteley.

“I think they really had a good game until the last movement of the game and had a good chance to win.

“So I think they would have been happy with the way they played and this week they will want to do even better.”

Both Whiteley and De Bruin said they have focused this week on the lineouts where their linespeed let them down against the Sharks. Against the Jaguares it would need to be better.

“They have a lot of experience and a good balance in their team, so it will be a nice challenge for us,” said the Lions skipper.