After being fancied as one last medal hope, Neil Powell's men collapse in the second half of their bronze medal match against England. 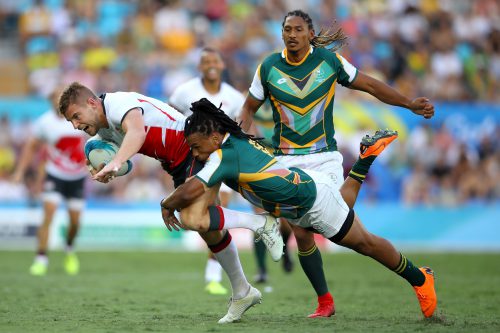 England Tom Mitchell is tackled by South Africa Rosko Specman in the Men's Bronze Medal Rugby Sevens Match between South Africa and England on day 11 of the Gold Coast 2018 Commonwealth Games at Robina Stadium on April 15, 2018 on the Gold Coast, Australia. (Photo by Mark Kolbe/Getty Images)

The Blitzboks felt gutted not to add to the nation’s medal tally on Sunday, captain Philip Snyman admitted, as they brought the curtain down on South Africa’s campaign after 11 days of multi-sport action at the Gold Coast Commonwealth Games.

After going down 24-19 to Fiji in the semifinals of the men’s rugby sevens tournament, the defending champions were 14-0 ahead at the break in the bronze medal playoff against England.

Their opponents ran rampant in the second period, however, and they were handed a 21-14 defeat.

Snyman, who was confirmed as the flag bearer for Team SA at the closing ceremony later on Sunday, felt it was time for a new breed of Blitzboks to take the global stage in the build-up to the 2020 Tokyo Olympics.

“I think this team is so much better than losing the third/fourth game, so we need to go and make a couple of things right,” the skipper said.

“For the majority of the group, I think this will probably be their last Commonwealth Games, and then the youngsters must take the system forward, especially in two years’ time at the Olympic Games. They must learn from our mistakes and correct them.”

The SA team took sixth place in the overall medals table, and while they climbed one place from their result at the previous edition of the Games in Glasgow four years ago, they bagged fewer medals with a total of 37 including 13 gold.

The track and field contingent made the largest contribution with 14 medals, and Chad le Clos was the squad’s best performer.

Le Clos scooped five medals for a career haul of 17 – one short of the overall Games record – as he became the most decorated swimmer in the history of the quadrennial showpiece.

The next edition of the Games will be held in Birmingham in 2022, after Durban was stripped of the hosting rights.

Everitt looks to Pienaar, Chamberlain to guide Sharks in Cardiff
4 hours ago
4 hours ago

'We're very happy,' says Gelant after Stormers end tour on a high
10 hours ago
10 hours ago

Everitt looks to Pienaar, Chamberlain to guide Sharks in Cardiff
4 hours ago
4 hours ago

'We're very happy,' says Gelant after Stormers end tour on a high
10 hours ago
10 hours ago