New Springbok era under Rassie starts on a depressing note

Yet another loss for South Africa against the Welsh as an experimental combination delivers a performance that says worryingly little of local depth. 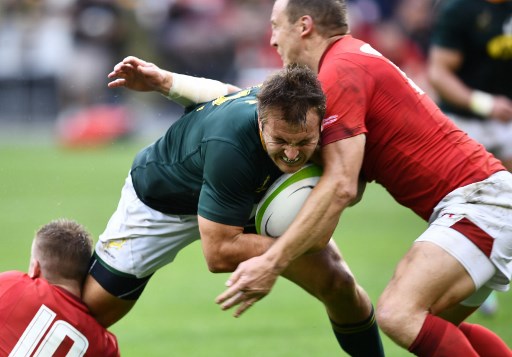 Andre Esterhuizen was one of few shining lights for the Springboks. / AFP PHOTO / Brendan Smialowski

An experimental Springbok side was expected to be rusty in the opening Test of the year, but at times they really looked worryingly mediocre in going down 22-20 to Wales in Washington on Saturday night.

It was a third consecutive loss for South Africa against the Dragons as Rassie Erasmus’ charges failed to summon the required intensity and execution to pull off a win.

Minutes after he put the Boks ahead 20-17 with a penalty, replacement flyhalf Robert du Preez had a kick charged down on his own goalline for Wales to score the match-winner through replacement hooker Ryan Elias with four minutes left on the clock.

In retrospect, the Boks lost this game in the first 40 minutes, a half that struggled to get going as countless scrums were reset and the ball lost in contact numerous times due to the wet underfoot conditions.

Wales capitalised on their limited opportunities to lead 14-3 as South Africa delivered what can only be described as a stale performance.

Things went better in the second half but barring a few good individual performances from the likes of lock Jason Jenkins, hooker Chiliboy Ralepelle and centre Andre Esterhuizen, there was little to get excited about.

There were few highlights, especially the first half, but centre Andre Esterhuizen caught the eye with a great break and chip forward as early as the second minute, while a crunching tackle from the big Sharks centre created the opportunity for wing Travis Ismaiel to pounce for the Boks’ first try.