Glitzy Springboks rally for a magnificent comeback win over England

Down 24-3 after 17 minutes, new captain Siya Kolisi inspires his troops on a night where the debutants shone. 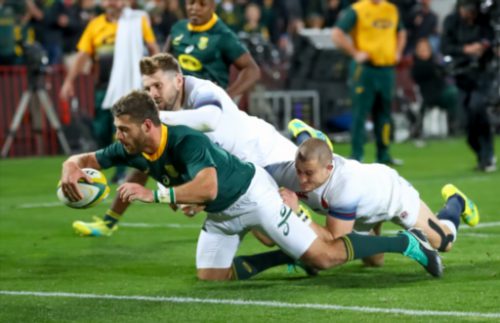 The Springboks are back on the winning trail as coach Rassie Erasmus achieved his first success as national coach.

But they had to endure a few anxious moments in beating England 42-39 at a packed Ellis Park on Saturday evening.

However, the close scoreline can’t mask a magnificent comeback from the hosts, who overturned a 3-24 deficit after just 17 minutes.

Spurred on by a massive crowd of 55 211, the Boks did superbly to score 26 unanswered points to essentially set up the platform for the victory by the end of the first half.

It was a good day for the Bok debutants.

Both wingers were among the try-scorers, while lock RG Snyman ignited South Africa’s pack in partnership with the robustness and experience of No 8 Duane Vermeulen.

England’s clinical attacking when they had the ball was impressive and they certainly were worthy opponents.

It would have been easy to give the award to right wing S’bu Nkosi, who scored twice on debut, and showed some outstanding touches but the experience of fullback Willie le Roux, who starred in his 42nd Test match, was crucial in leading the Boks’ attack.