The Lions pivot knows he's on call for whenever his national team might need him. 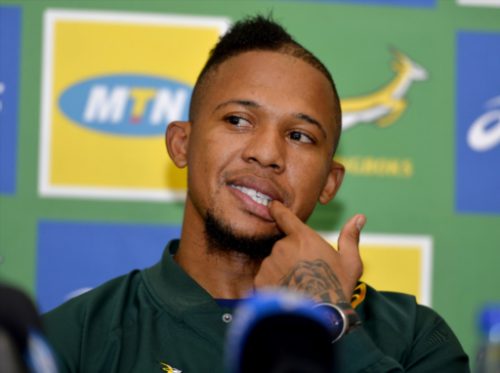 Elton Jantjies didn’t get the impression his days were numbered as a Test No 10 when he was left out of the Springbok squad for last weekend’s second England Test in Bloemfontein.

While Handre Pollard is settled as the incumbent, Jantjies is still very much in the mix for the third and final England Test in Cape Town on Saturday after he had to make way for Jesse Kriel for the second Test.

“The coach told me it was only to give Jesse a run from the bench,” said Jantjies.

Jantjies added that coach Rassie Erasmus also told him he must be ready to play at any given time in the near future.

“And if I do play, make sure my body is in the best possible condition because I had played a lot of matches in Super Rugby and last year as well,” he said.

As a seasoned campaigner of 22 Tests, the 27-year-old Jantjies said it’s not an individual issue for him but about the overall system, making sure he creates enough for the players around him.

“There are a few exciting flyhalves coming through which will serve the team well for the next five or six years.

“The balance between attack and defence is probably the best it has been since 2016 and Rassie has picked up things we haven’t noticed before or which hadn’t been picked up by other coaches I have worked with,” he said.

Bok backline coach Mzwandile Stick was full of praise for Lions coach Swys de Bruin, who joined the Boks as a backline consultant during the June international break.

“To have Swys in the system is great as he has worked with guys in the squad like Faf (de Klerk) and Aphiwe (Dyantyi) before at the Lions.

“We wanted feedback on somebody who had worked with them in the past. I must give Swys credit, he has done great work with us in the squad.

“The youngsters in the side are full of energy and you don’t want to limit them and say ‘hey just stick to your basics’, but rather give them freedom,” Stick said.