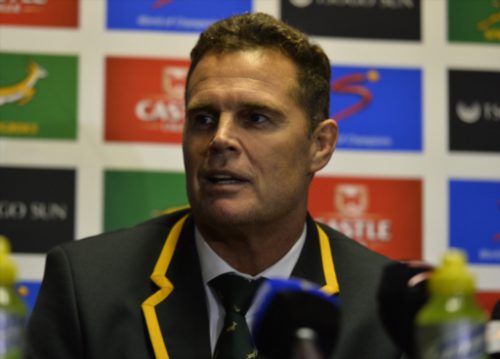 Springbok coach Rassie Erasmus cited his side’s inability to adapt to referee Glen Jackson’s strict interpretation of0 the breakdown as one of the main reasons for them going down 25-10 to England in the third and final Test at Newlands.

While both sides scored just one try each, it was the six penalties of England captain Owen Farrell that proved to be the main difference on the night.

“Glen can be a bit trigger happy at the breakdowns. He wants nice clean breakdowns, and we suffered for that, but we knew that beforehand, that is just the way he blows the game,” said the Bok coach.

“We spoke about it five minutes before the game. We just didn’t adapt as well as we should have. That is something we should have been able to control but we didn’t.”

Erasmus didn’t believe his side lacked motivation after sewing up the series last weekend in Bloemfontein.

“It’s nicer to learn while you’re winning,” he said.

“It’s not so nice to learn while you are losing. We did learn a lot in this game. You have to adapt and implement what you’ve learnt though, otherwise you just say that you are learning.”

Erasmus tried out a few new combinations but said he doesn’t want to use that as an excuse for the loss.

“We did take gambles today and we tried new combinations, but discipline is not about combinations so I was very disappointed at how poor we were at what we could control, and we could have controlled our discipline a lot better.”