Lions hoping for a rather big favour

An unlikely home final is on the cards if a certain other result go their way and they fulfill their end of the bargain. 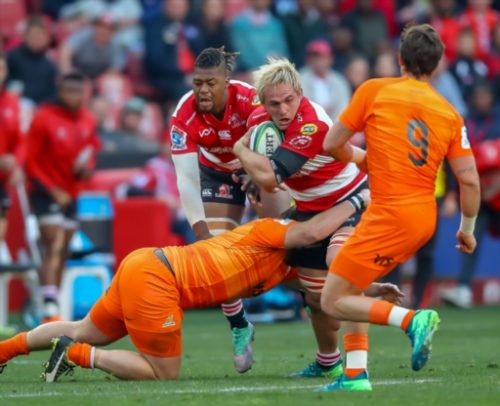 South African flag-bearers the Lions will be hoping the final pieces of the puzzle fall into place for them to still
potentially host the Super Rugby final.

After disposing of the Jaguares 40-23 in the quarterfinal at Ellis Park on Saturday, the Lions need to beat the Waratahs in the semifinal and then hope the Hurricanes do them a massive favour by shocking tournament favourites and defending champions Crusaders in Christchurch.

“Home advantage in a semifinal is vital and that’s why we need to keep pushing game by game,” said thrilled Lions coach Swys de Bruin.

“And then also start hoping the Hurricanes play a massive game and then we’ll to stick to our end of the bargain of course.”

Hurricanes coach Chris Boyd is an old acquaintance of De Bruin and the Lions mentor said he just might send him a message this week.

“I know Boydie very well. I coached with him years ago at the Sharks Academy, so I’ll definitely send him a good message,” chirped De Bruin.

The Lions coach allayed fears over star hooker Malcolm Marx after he was taken off 10 minutes before the end of the quarterfimal, saying it was a precaution after a knock.

But there is however some concern over flanker Cyle Brink, who was sent for tests after a “shoulder stinger”.

De Bruin said although they trounced the Waratahs 29-0 in Sydney earlier in the competition, it will have no bearing on their knockout clash.

“They are a very good side. That day was honestly one of the perfect days for us, everything went our way, every bounce of the ball,” he said.

“It was just a great game for us and we are really up for it, but they would no doubt want to come and rectify their mistakes after that result.”

Captain Warren Whiteley said “semifinal rugby is tough” and cautioned over counting your chickens before they hatch, even when playing at home.

“Playing against the Waratahs, we’ll have to put in the work to get the result. We won’t look too far ahead to a possible final,” Whiteley said.

“We are focusing on the Waratahs and we know they will come here with all guns blazing. They have nothing to lose and if they are on their game on the day, they can play some real quality rugby.”