The hosts were full value in defending their title as Swys de Bruin's men endure heartache for a third year in a row. 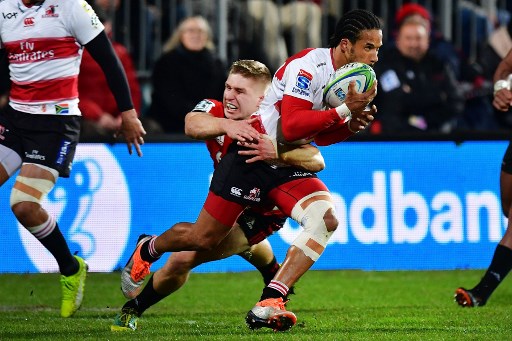 The Lions' Courtnall Skosan (centre R) is tackled by the Crusaders' Jack Goodhue (centre L) during the Super Rugby final match between the Canterbury Crusaders of New Zealand and the Golden Lions of South Africa at AMI Stadium in Christchurch on August 4, 2018. / AFP PHOTO / Marty MELVILLE

The ruthless Crusaders lived up to their pre-match hype as they made the spirited Lions pay for not using their ample opportunities, winning the Super Rugby final 37-18 in Christchurch on Saturday.

It was  Swys de Bruin’s troops’ third straight loss in the showpiece game while the Crusaders secured back-to-back titles and a record ninth overall.

The Lions dominated territory, but the Crusaders suffocating defence nullified the threat the Lions posed with their famous rolling maul early and disrupted any sort of momentum in general.

Despite a 67th minute yellow card to centre Ryan Crotty for cynical defending from a maul, the Crusaders were ruthless when they were given the slightest chance.

The Lions never stopped fighting and two passages of play that featured brute strength from Cyle Brink and Malcolm Marx saw them at least become the first South African team since the Sharks in 1996 to score tries in a Super Rugby final overseas.

Crusaders flyhalf Richie Mo’unga showed why he is pushing for a place in the All Black starting lineup with another sterling performance. He set up the Crusaders second try by fullback David Havili by fielding a poor Elton Jantjies kick and set off on a magic run. In general play, he gave direction to the attacking mindset while his place-kicking again was superb.