Is Rassie in trouble for his Bongi subbing? Twitter thinks so

The Springbok coach seemed to blame his starting hooker for the stuff up of a lineout that led to one of the Aussie tries in Brisbane. Then Malcolm Marx did the same... 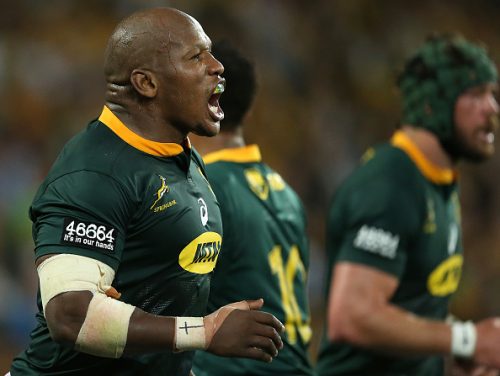 Bongi Mbonami of the Springboks celebrates his try during The Rugby Championship match between the Australian Wallabies and the South Africa Springboks at Suncorp Stadium on September 8, 2018 in Brisbane, Australia. (Photo by Jono Searle/Getty Images)

Springbok coach Rassie Erasmus likely to find himself under pressure in the aftermath of his Rugby Championship meeting with the Wallabies in Brisbane on Saturday, following his hasty substitution of Bongi Mbonambi.

The Stormers hooker was yanked off in the 35th minute of the match, almost immediately after he overthrew at a line-out about 8m from the Boks’ tryline.

The ball was allowed to bounce and led to the simplest of tries for Aussie centre Matt Toomua, who dotted down under the posts.

It would seem Erasmus placed the blame squarely at Mbonambi’s front door, who earlier kept his composure superbly to score the Boks’ opening try from a rolling maul.

Blame bongi all u want but someone called that lineout…

You have to take emotion out of coaching… Players make mistakes, but you can break them with impulsive decisions…

If Mbonambi develops psychological and confidence issues as a result of getting subbed in the first half he can call Lawrence Sephaka, who can over him a shoulder to cry on. You're not alone. It's not your fault. It will get better. #AUSvRSA

Bongi’s throw was 100% accurate. Whoever called it, together with PSDT and Kolisi not obeying said call, is to blame for that mess.

Nobody jumping in the front, which means the call was made to throw deep. Pinpoint throw. PDST and Kolisi late off the line. pic.twitter.com/Zcm2tgDqb0

Would Rassie have taken off Marx is he had cocked up that lineout?

And then it happened…

So Rassie painted himself into corner by hooking Bongi for poor throw. Marx does same. Now what? #AUSvRSA