Elton’s stamp of approval from an All Blacks star

Counterpart Beauden Barrett wouldn't be surprised if the Springboks backed the Lions pivot again in Wellington. 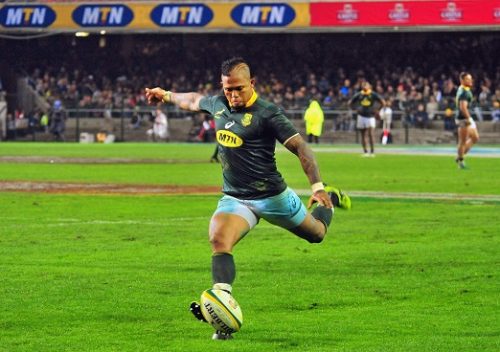 Despite indications that Handre Pollard will reclaim the No 10 jersey for the Springboks daunting Test against the All Blacks in Wellington on Saturday, Elton Jantjies received boosts from two quarters.

The Lions pivot, perhaps a tad unexpectedly, was picked in the flyhalf jersey in Brisbane this past weekend but struggled to make an impact in a poor team performance.

ALSO READ: My job is on the line, admits Erasmus

Nonetheless, All Blacks star Beauden Barrett has given his stamp of approval should Jantjies be backed again.

“I’m not sure who they’ll play, both Elton and Handre (Pollard) are very good options. Handré typically likes to run with the ball, flat at the line. He’s quite a good ball-carrier.”

National coach Rassie Erasmus also chose to see the positive aspects of Jantjies’ performance, noting how a few silky touches with the boot create a couple of opportunities on attack.

“He did brilliant things at times and he kicked very well at the posts‚” he said after the 23-18 loss to the Wallabies.

“We will have to find the right combinations and find them quick enough because we know what the consequences are if we don’t do that.”

However, on Monday, Erasmus changed his tune to an extent.

“We might give Elton the last 20 minutes or so, otherwise we’ll go to the World Cup with one flyhalf we trust.”