Once criticised as an individualistic type of player, the Springboks' fullback has visibly matured since moving to England. 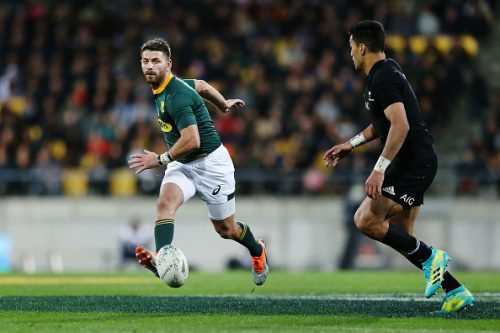 Willie le Roux of the Springboks puts in a kick during The Rugby Championship match between the New Zealand All Blacks and the South Africa Springboks at Westpac Stadium on September 15, 2018 in Wellington, New Zealand. (Photo by Anthony Au-Yeung/Getty Images)

Willie le Roux’s true value to the Springboks doesn’t lie in his ability as game-breaker anymore.

Instead, national assistant coach Mzwandile Stick believes the 29-year-old fullback has matured into a senior player whose greatest strength is making those beside him look good.

ALSO READ: Explained: What makes Ruhan Nel so attractive to the Boks?

Following an earlier arrangement that Le Roux would miss the final two matches of the campaign due to club commitments in England, Wasps released him again after he requested the opportunity to play his 50th Test against the All Blacks at Loftus in two weeks’ time.

“He adds great value to our side,” Stick said on Monday, where the Boks are preparing for Saturday’s Rugby Championship Test against Australia in Port Elizabeth.

“Before the Test against the All Blacks, I remarked that if Willie, Faf (de Klerk) and Handre (Pollard) make good decisions on the day, then it will lead Aphiwe Dyantyi to claiming the Man-of-the-Match award. It seems to me they considered that a real challenge.”

The exciting winger Dyantyi did indeed claim most of the plaudits from the 36-34 victory after scoring two tries but he was merely feeding off the support he was afforded.

“We saw it on the field. Once you get Willie and the others playing at their best, showing leadership and executing better than the rest, you have a better chance of winning,” said Stick.

“That’s why we’re really grateful for him coming back.”

However, Le Roux was only expected in camp by Monday evening, leading to concerns that the travel demands might leave him a bit tired.

As a result, there are whispers that he might be confined to the bench this weekend as an impact player.

That would mean that either 20-year-old Damian Willemse slots in at No 15 though Stick likes the idea of Cheslin Kolbe’s Le Roux-type magic being employed.

“The word for Cheslin is X-factor. He is a very special player and the one thing about him is that you shouldn’t focus on his size, because he has a big heart. But you already saw against the All Blacks how he made some big calls and big tackles. Of course, he can also create something from nothing on attack, so he adds a lot to our side,” said the Bok assistant coach.