Coach Rassie Erasmus is spoiled when it comes to his two premier loosehead props. But what is the best way to make use of them? 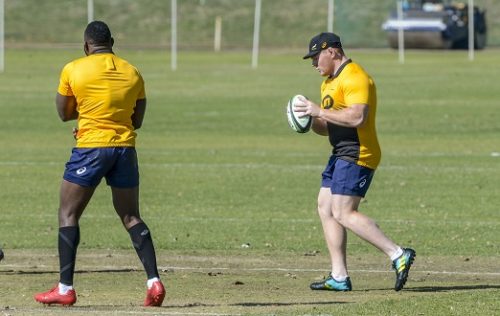 Steven Kitshoff and Tendai Mtawarira of the Springboks during the Springbok training session at St Stithians College on May 28, 2018 in Johannesburg, South Africa. (Photo by Sydney Seshibedi/Gallo Images)

For over a year, the Springboks used the set pattern of starting Beast Mtawarira at loosehead prop and bringing on Steven Kitshoff as impact player in the second half.

Yet that arrangement changed on South Africa’s recent trip to Australasia, where coach Rassie Erasmus decided to switch the two men’s roles.

And by all accounts it’s been a success, with Kitshoff in particular illustrating vividly that he can be considered the long-term successor to Mtawarira.

But what should the plan be as the Boks reach the business end of the current Rugby Championship campaign?

Should the status quo remain or must the vastly experienced Mtawarira be restored to the starting line-up?

Kitshoff doesn’t seem to mind much.

“The competition between the two of us is very healthy. We push each other weekly to become better players. It it continues like that, I’ll be happy and he’ll be happy. I really look up to him.”

Is that, however, the ideal dynamic?

The 33-year-old is still very much a nippy presence on the field and still actively looks for work.

He’s only made three less ball carries than Kitshoff (18 to 21) despite playing almost 60 minutes less than his younger teammate and seems more intent on keeping continuity on attack, as evidenced by his four off-loads.

As Kitshoff mentions, Mtawarira “knows his game from back to front and is a scrum expert”, which is an important attribute at the start of matches when teams look for stability.

He’s only conceded three penalties, attesting to his discipline and is a robust defender, with 19 tackles of which four have been dominant hits.

That said, stats from his last two matches reveal that he perhaps isn’t quite as dynamic as substitute when games tend to become looser and faster.

Mtawarira only made one tackle in Brisbane against the Aussies and while he completed five in the momentous victory over the All Blacks, he also missed two.

The flame-haired front rower is a bundle of energy whenever he is on the field.

He’s made an impressive 42 tackles, five of them dominant, and has carried the ball 21 times to make 93 running metres.

Like Mtawarira, he’s a willing distributor and arguably more of a presence in broken play than his teammate.

Kitshoff might need to  address his discipline as he’s conceded six, which is more than one per game.

It’s arguable that the Stormers star probably is fit enough to last the whole 80 minutes, but that’s an unlikely strategy under Erasmus.

The problem is that in the current context, Mtawarira might not be as a dynamic replacement for him as, for example, a Thomas du Toit or Trevor Nyakane.

VERDICT: Keep Mtawarira as the starting loosehead and continue to employ Kitshoff as the trump card replacement.