Not only does it draw on the All Blacks' famous haka, it was has a distinct African flavour ... from Kenya. 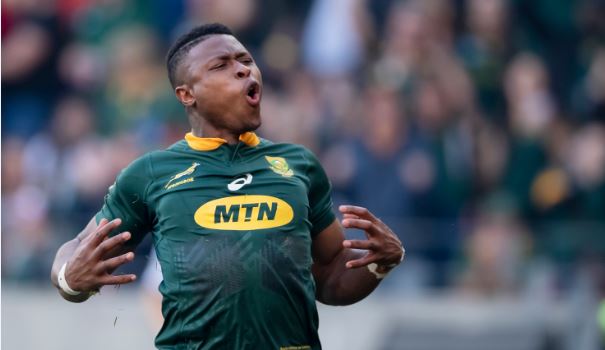 Aphiwe Dyantyi has been banned for four years for doping. Picture: Getty Images

When Aphiwe Dyantyi scores a try, you can bet on a trademark celebration.

The raking of his fingers across his chest before the bulging of biceps is rapidly become one of the most common and exhilarating sights in South African rugby.

After all, the Springbok winger has scored six tries in just eight Tests.

The origin of that celebration is pretty special … just like Dyantyi’s talent.

“The story behind it is that when I was growing up, I watched a lot of rugby with my brothers,” the 24-year-old Bok sensation said on Thursday, ahead of the weekend’s big clash against the All Blacks at Loftus.

“As any spectator, one of the greatest moments is marvelling at the haka, and it was no different for me.”

In fact, Dyantyi remembers a specific occasion, in 2005, when then All Black skipper Tana Umaga unleashed the Kapa O Pango rendition of the haka for the first time, ironically against the Boks in Auckland.

“Tana did it with so much passion, I kind of got it from there. I  then tried to take it and make it my own, and incorporate it into who Aphiwe is,” said Dyantyi.

Yet the Lions star’s product wouldn’t be complete without incorporating an African element.

For that, he took Kenya’s Maasai tribe as inspiration.

“When I was in Grade seven, I watched this movie. In it, there was a kid from the royal family who has to go through an initiation process into manhood,” said Dyantyi.

“The kid goes out into the wild and he faces a lion that he goes on to defeat. He did a similar sort of thing in terms of celebrating, and it’s also where I drew my inspiration. It’s kind of like conquering lions.”