Lions ready to fight tooth and nail to keep Mostert

The union believes there are 'irregularities' with the Springbok's move to England, especially given that his agent has been suspended for three years. 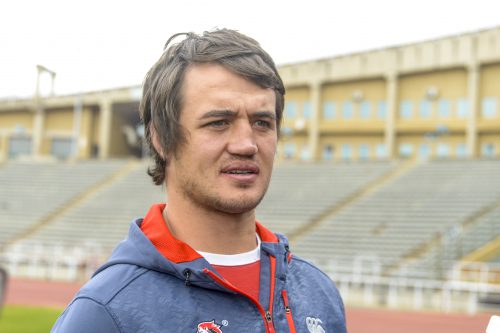 Franco Mostert of the Lions during the Emirates Lions Mixed Zone at Johannesburg Stadium on June 26, 2018 in Johannesburg, South Africa. (Photo by Sydney Seshibedi/Gallo Images)

Golden Lions chief executive Rudolf Straeuli is staying put with the union, and he is going to throw the regulation book at Gloucester in response to Springbok lock Franco Mostert’s move to England.

There were some irregularities involving Mostert’s signature with the club, according to Straeuli, and they would do their best to keep him at the Lions.

“Franco is still contracted by us and we are still in the middle of a dispute with Gloucester,” he said.

“He must honour his contract, with all respect to Franco, but my board told me I must act against Gloucester.

“His agent had been suspended for three years and it has happened before with Lyon in France, and the second time we said ‘no’.”

Straeuli also explained why he postponed the Lions team announcement until late yesterday for Friday night’s must-win Currie Cup game against the Pumas in Nelspruit.

“We wanted to pick the best possible side with a few guys we got back from the Boks.

“They have done medicals on all the Boks. Malcolm Marx and Warren Whiteley (both contracted players) won’t be available this weekend, but Lionel Mapoe, Elton Jantjies, Aphiwe Dyantyi and Franco were the guys we were waiting on.

“They were training full-out with the team but we were just waiting for them to be cleared.

Scrumhalf Nic Groom, taking over from lock Marvin Orie, will captain the side for the first time.