Released for Currie Cup duty, the 20-year-old awaits to see where he'll play in the blue and white hoops: flyhalf or fullback? 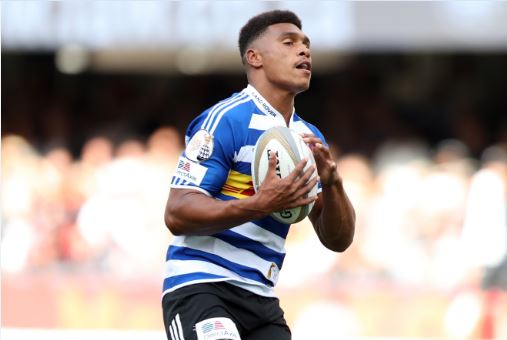 Western Province don’t sound particularly worried over the conundrum of whether to play Damian Willemse at flyhalf or fullback for the remainder of the Currie Cup.

The gifted 20-year-old has made all his Springbok appearances in the No 15 jersey and national coach Rassie Erasmus has given no indication yet that that arrangement will change.

However, Willemse made his mark at pivot for the Stormers in Super Rugby this year and handled the pressure of a difficult role well.

“We haven’t really decided on his role yet,” said Province assistant coach Dawie Snyman, ahead of this weekend’s North-South derby against the Blue Bulls at Loftus.

“Obviously the Boks have had a look at him at fullback. We accommodated a request earlier this season for him to play there against Griquas and he played in our previous Currie Cup campaign too. We’ll have to see how things go this week.”

Willemse’s superb side-stepping skills were on show last weekend against the All Blacks, where he first caught a high ball and then jinked past two defenders.

It’s that ability that makes some observers believe his bread might be properly buttered at fullback, where there’s generally extra space.

Yet Snyman believes his experience at both 10 and 15 makes him a rounded player, regardless of the actual number on his back.

“Damian’s a really special player. It doesn’t matter where you play him,” he said.

“The real benefit of having a player like him is the variation he brings to your product. He’s effective as a first receiver and also potent on the outside. You can utilise him in different ways. He’s almost a creative hub of sorts for our attack.”