It’s the ‘brotherhood’ that was the Sharks’ winning recipe

It's that trust in each other that meant the Durbanites didn't panic after trailing at half-time in the Currie Cup final. 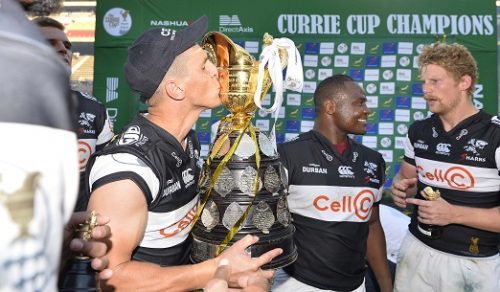 Trailing 6-0 at the break, the Sharks scored the only two tries by hooker Akker van der Merwe and flank Tyler Paul as their suffocating defence and powerful pack paved the way to a hard-fought win, despite struggling in the scrums.

It was the Sharks’ eighth title since they lifted their maiden Currie Cup crown in 1990, and their first since 2013 when they also surprised Province at Newlands with a score of 33-19.

“The whole week in the lead-up to the final we spoke as players and management to form a closely-knit brotherhood, to play for one another and fight for each other, and that’s exactly what the players did for each other,” Du Preez said.

“I wouldn’t say we were concerned after trailing 6-0 at the break, but we needed to protect our own ball a bit more and it started to produce dividends in the second half. I must salute the players for the excellent defence they produced.”

There were few signs of the Province team who had gone unbeaten throughout the competition and who thrashed the Sharks 50-28 in Cape Town just a month ago.

While their scrum was superb with props Ali Vermaak and Wilco Louw putting the heat on opposite numbers Thomas du Toit and Juan Schoeman, their disastrous lineouts were singled out by Province coach John Dobson as one of the main reasons for their defeat.

“If you concede so many turnovers and lose eight of your own linouts, it’s very difficult to defend against,” Dobson said.

“I would rate this performance as by far our poorest of the season, but I must admit, on this performance, the Sharks deserved to win it and they out-thought us on the day.”

Sharks flyhalf Robert du Preez jnr won back-to-back titles after lifting the cup with Province in Durban last year, and he was thrilled to put one over his former team.

“We crossed their line four times (two tries were disallowed), while they didn’t cross our line once, so we were happy about that.”