The hits and flops of the Springboks’ tour

This was a trip where there was more to lose than gain. Some did shine, but other stalwarts soured their respective international seasons. 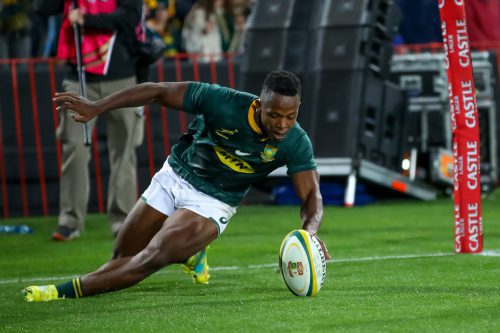 Given how Rassie Erasmus very much relied on his core stalwarts to carry the Springboks during their year-end tour, the trip through Europe probably had the potential to ruin seasons more than save them.

Indeed, there wasn’t much to gain for various players – some of them, frankly, overplayed – and it proved the case in some instances.

But there also a few men who put up their hands and showed their worth.

Here are the hits and flops of the Boks’ tour.

The stocky, but power-packed winger really didn’t play like a man who had missed almost three months of action during the season.

The 22-year-old did his basics well, consciously seeming to accept that conditions weren’t going to favour his attacking instincts.

Instead, he worked his socks off off-the-ball.

There were hiccups, like botching the aerial ball that led to France’s second try in Paris, but he immediately made up with a predatory finish right afterwards from a spilled kick-off. Handre Pollard of South Africa during the Castle Lager Outgoing Tour match between Wales and South Africa at Principality Stadium on November 24, 2018 in Cardiff, Wales. (Photo by Steve Haag/Gallo Images)

The goal-kicking might not have been accurate at all times, but South Africa’s flyhalf has emerged from this tour with an enhanced reputation.

His willingness to attack the line not only added a dimension to a reasonably stale attack, he frequently found himself in scoring positions and made them count.

There was also improved mental steel from the 24-year-old as a few setbacks didn’t seem to dampen his effectiveness with ball in hand. Steven Kitshoff of South Africa tackled by Ellis Jenkins of Wales during the Castle Lager Outgoing Tour match between Wales and South Africa at Principality Stadium on November 24, 2018 in Cardiff, Wales. (Photo by Steve Haag/Gallo Images)

Props are underappreciated in general and even more so in the heavier conditions of Europe.

But the flame-haired stalwart was consistently excellent for a punchy, but tired pack of forwards.

He anchored the scrum, tackled robustly and showed typical enthusiasm as a ball-carrier.

Kitshoff also reminded of his underrated ball-slowing and poaching abilities at vital times. 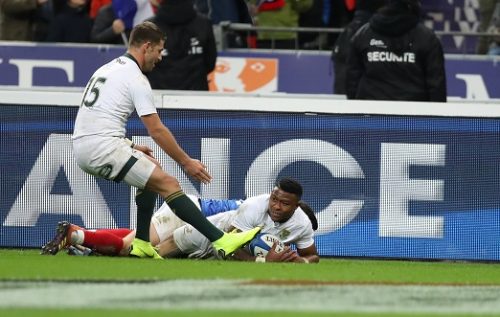 Aphiwe Dyantyi of South Africa going over for a try but not given during the Castle Lager Outgoing Tour match between France and South Africa at Stade de France on November 10, 2018 in Paris, France. (Photo by Steve Haag/Gallo Images)

World Rugby’s breakthrough player-of-the-year certainly doesn’t make this list because he was anonymous.

There was more than enough evidence that the 24-year-old winger tried his utmost to stay in the thick of things.

But things just simply didn’t want to go his way.

Dyantyi did look mentally fatigued and at times seemed to try and rush things in order to make his luck turn.

He frequently jumped out of his defensive line, either looking to make the spot tackle or grab an intercept, and also didn’t always possess safe hands.

His troubles need to be viewed though as a learning curve and an experience that should make him stronger. Damian de Allende of South Africa on attack during the Castle Lager Outgoing Tour match between England and South Africa at Twickenham Stadium on November 03, 2018 in London, England. (Photo by Steve Haag/Gallo Images)

Twickenham suggested a new dawn for the well-built inside centre as his physicality troubled the English throughout.

However, after that, De Allende fell into the same groove that’s bedevilled him for years now.

Unimaginative running lines, underpowered tackling and a painful lack of distribution illustrated again that he remains limited at this level.

The Bok backline can’t expect to move to a higher gear with him in midfield. 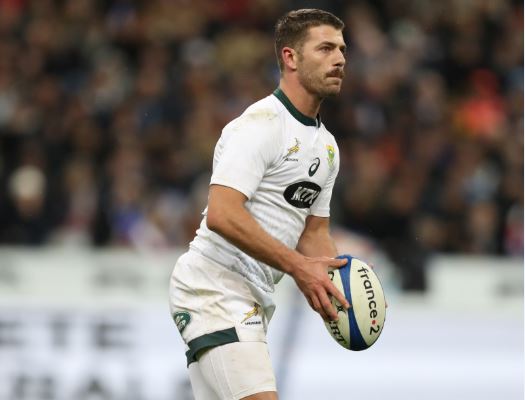 The mercurial fullback showed guts in delivering a composed performance against Scotland, where he executed his basics reasonably well.

Unfortunately, that showing was sandwiched between two distinctly average ones.

In Cardiff, there was a joke that he’d used up his quota for catching aerial balls against Scotland by almost dropping all of them against the Dragons.

As a senior figure in the backline, Le Roux remains far too inconsistent.